ASC 606 becomes mandatory for all public companies at the end of 2017. A few months ago, we noted that a small number of S&P 500 companies reported their intent to adopt the new standard early; a bold move, considering that ASC 606 is by no means an easy standard to adopt. Further, the level of scrutiny early adopters are likely to receive from analysts and peers puts additional pressure on the brave few.

Meanwhile, we expect to see more news on ASC 606 adoption plans in Q1 2017 filings. The chart below presents the distributions of the S&P 500 companies with respect to the new standard adoption. Audit Analytics identified five major categories of companies: 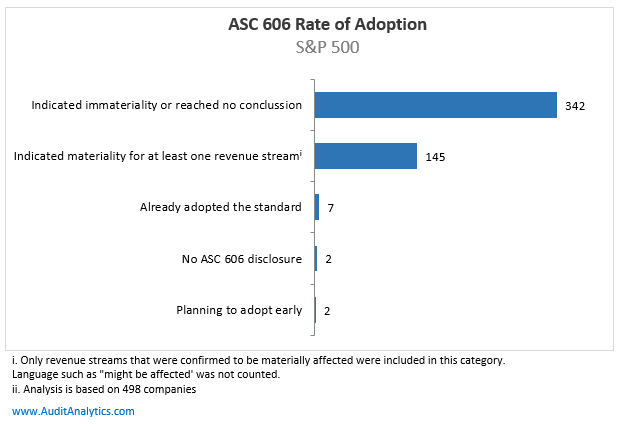 Materiality assessment is the key for the decision making in the implementation process. Based on the disclosure alone, it is not always easy (and in many cases, impossible) to differentiate between cases where a nearly-complete analysis did not identify revenue streams that would be significantly affected; and cases where it is too early to make any materiality conclusions.  It would be safe to assume that at least for some of the companies the standard is likely to be immaterial. At the same time,the  WSJ reported that as many as a third of the companies surveyed may not be able to meet the January deadline. Similarly, a lack of disclosure regarding an anticipated adoption method (modified or full retrospective) hints that many companies may not be ready.

Regardless of whether the companies are ready, in some cases the disclosure is just too generic. Recently, at least two companies received SEC comment letters with request to provide qualitative disclosure of the potential impact (look here and here):

You state that you are in the process of evaluating the impact that the amended revenue recognition guidance in Topic 606 will have on your consolidated financial statements. Please revise to provide qualitative financial statement disclosures of the potential impact that this standard will have on your financial statements when adopted. In this regard in your next filing, include a description of the effects of the accounting policies that you expect to apply, if determined, and a comparison to your current revenue recognition policies. Describe the status of your process to implement the new standard and the significant implementation matters yet to be addressed. In addition, to the extent that you determine the quantitative impact that adoption of Topic 606 is expected to have on your financial statements, please also disclose such amounts. Please refer to ASC 250-10-S99-6 and SAB Topic 11.M.

We would think that the companies should not wait for the SEC to make adjustments to the disclosure. Hopefully, next quarter, as we move even closer to the effectiveness day, we will see more tailored and detailed disclosure.

As we noted above, some companies are likely to be significantly affected, while for others the standard is going to be less of a challenge. The table below provides industry-specific examples of the revenue streams and presentation issues that, based on the disclosure, would be materially affected.

In this blog, we mostly focused on the disclosure available in the revenue recognition and new accounting standard footnote of the annual and quarterly reports. The complex ASC 606 standard, however, will likely necessitate additional internal controls considerations. A recent blog noted Ford’s Item 4 disclosure. Enernoc and Commvault also provided similar disclosures. (For additional considerations, see also recent Deloitte publication). It still remains to be seen how the standard is going to affect non-GAAP presentation – and in particular, backlog metrics.