As summed up by the Wall Street Journal, 2016 has seen an “all time low” in restatements which could be attributed, as the article suggests, to tighter controls over financial reporting in accordance with the Sarbanes-Oxley Act of 2002. 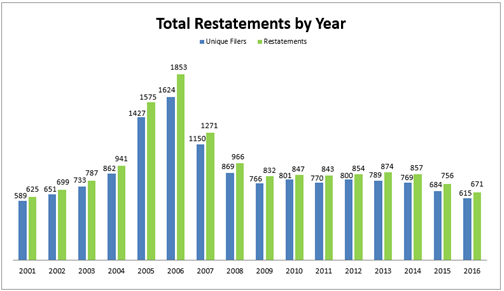 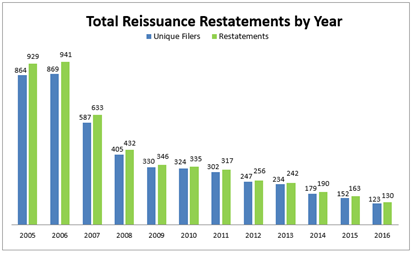 ce Restatements have declined for the tenth year in a row since 2004, when the 8-K disclosure requirements came into effect. 2016 shows a record low of 130, a sharp decline from 2006’s 941, the highest number in our sample period. 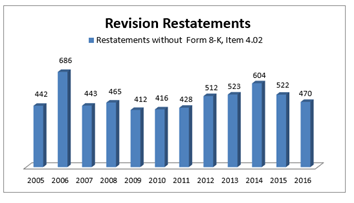 Additionally, the four year increase of US Accelerated filers that filed restatements spanning from 2011 to 2014, was broken in 2015 and continues to be on the decline in 2016. Interestingly, US Non-accelerated filers have also continued to decline and have hit a record low of 284 filers.

In order to gauge the severity of restatements, we turn to impact of net income. According to our report, about 59.1% of the restatements disclosed by publicly traded companies had no impact on earnings. This is the second highest percentage in 9 years.

Overall, the trend for restatements continues to be on the decline. We are seeing fewer restatements, and those restatements that we do see, more often than not lack severity or material weakness. While the average amount of days to restate is slightly higher, the increase in Revision Restatements over Reissuance Restatements indicates more transparency and better quality disclosures.