If any extra motivation is needed to take that last sick day of the year around the holidays feel free to justify it with SEC filing data.

Over the past five years there’s been a decrease in filings of about 50% on the business day following the observed Christmas holiday. A review of over 200,000 comment letter and 8-K director and officer disclosures shows a marked decrease every year on the business day following Christmas. In 2014, when the day following the holiday fell on a Friday, only two filings of these types were disclosed – that’s an incredibly low number, considering the average for that year was 124 filings.

It isn’t just the day after Christmas either; there is a similar trend in the whole week after the holiday until the New Year, where there are around 30% fewer filings per day in that week compared to the average. 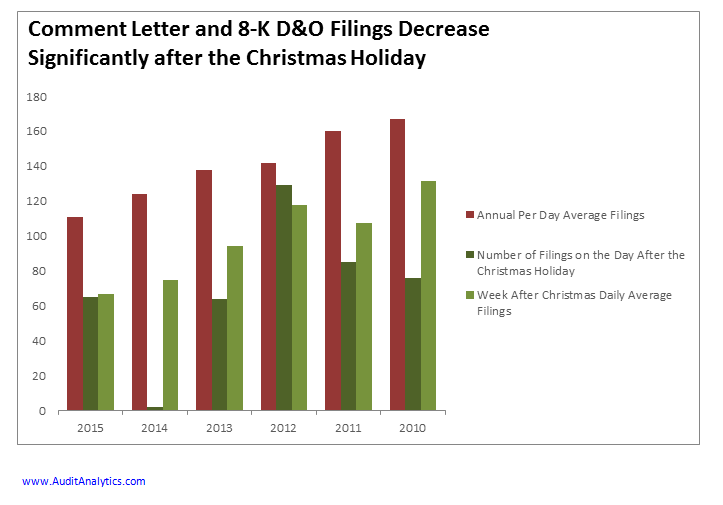 Of the 1,950 filings in the five year span of days following the holiday, the top three industries of filers (excluding funds/trusts) are Chemical Manufacturing, Credit Intermediation, and Computer and Electronic Product Manufacturing. The latter two are noteworthy considering the holidays are quite demanding of consumer credit and electronics. In September 2013, we had a post pointing to whether filing timing could be used to obscure negative news. But, to keep in spirit with this post and with my own time off in the coming days to be considered, a deep dive into the comment letter and 8-K filings of these companies is quickly becoming a 2017 issue.

Hey, everyone else is doing it.