In a recently released tool for the Audit Committees, the Center for the Audit Quality stated that it is “urgent that audit committees understand how management is assessing the impact of the new revenue recognition standard”. ASC 606 (which is based on ASU 2014-09, Revenue from Contracts with Customers) is effective starting with annual reporting periods beginning after December 15, 2017. Early adoption is permitted for fiscal periods beginning after December 15, 2016. The implementation is expected to have a material impact across the broad range of the industries. Yet, several sources recently rang an alarm bell about what appears to be a low level of preparedness only a year before the implementation date.

For example, a recent poll indicated that less than 20% of the executives are fully prepared for the new standard effectiveness. As well, a WSJ article, using a sample of 100 large companies, stated that only 15 companies provided disclosure about the method they are going to use to adopt the new standard.

Considering the concerns above, it should come as no surprise that only a handful of the companies are planning to adopt ASC 606 early. 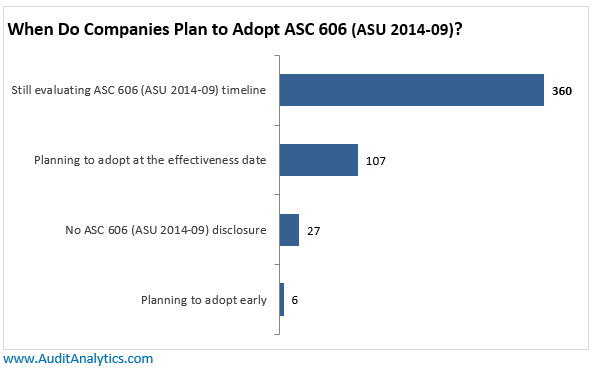 Interestingly, some of the companies that indicated that they are planning to move to the new revenue recognition method in 2017, had to caution that the analysis may still be ongoing. For example, let’s look at the contingent language used by First Solar:

“We expect to adopt ASU 2014-09 in the first quarter of 2017 using the full retrospective method. However, our ability to early adopt using the full retrospective method is subject to the completion of our analysis of certain matters, including sales arrangements accounted for as partial sales of real estate, and obtaining the information necessary to restate prior periods.”

Overall, two thirds of the companies provided boilerplate disclosures with details of the expected adoption of the ASU 2014-09.

The level of the disclosure so far is not very encouraging. Yet, it is worth noting that the analysis above was, for the most part, based on the quarterly reports. The annual reports are typically significantly more detailed, so we expect a more comprehensive disclosure to be provided in the annual reports filed in early 2017.