In a major victory for those supporting patent litigation venue reform, the Supreme Court yesterday issued an opinion in the matter of TC Heartland v. Kraft Foods Group Brands, LLC., holding that for domestic corporations, “reside” in 28 USC §1400(b) refers to the state of incorporation and that the amendments to 28 USC §1391(c) did not alter or change the meaning of §1400(b). This decision overturns the Federal Circuit’s previous decision that granted plaintiffs considerable freedom in the determination of patent litigation venue.

TC Heartland, a manufacturer of sweetened drink mixes, (represented by Hughes Hubbard & Reed) was sued in Delaware by Kraft Foods (represented by Goodwin Procter and Dinsmore & Shohl). TC Heartland did not have an established business location and was not registered to conduct business within Delaware, but did ship its products there, including the allegedly infringing products contested by Kraft Foods. TC Heartland petitioned the Federal Circuit for a writ of mandamus to either have the case dismissed or transferred to a different district, claiming that Delaware was not the proper venue as the company did not “reside” in the state according to §1400(b). The Federal Circuit denied the petition. In December 2016, the US Supreme Court granted certiorari – in other words, to review the lower court’s decision.

Kraft Foods sued in Delaware because of a 1990 decision by the US Federal Court of Appeals in VE Holding Corporation v. Johnson Gas Appliance Co, which determined that plaintiffs in patent infringement cases could sue in any district where the defendant was subject to its jurisdiction or conducted sales, and not just in a court where a defendant was incorporated or had an established business location. This 1990 decision held that due to Congress’ 1988 definition change of the word “reside” in 28 USC §1391(c), which governs venue for corporate defendants, the meaning of the word “resides” was also changed in the statute determining patent litigation venue, 28 USC §1400(b). Over time, certain federal courts became hotspots for patent litigation, as patent holders searched for plaintiff-friendly jurisdictions in which to file their cases. This controversial practice has become known as “venue shopping,” and critics have alleged that the practice has led to abuse of the patent system by “patent trolls.”

How will the Supreme Court’s ruling in the TC Heartland case affect patent litigation venue distribution? According to an analysis of material patent litigation involving SEC public registrants between January 1, 2014, and May 12, 2017, patent cases are concentrated most heavily within five courts. Of these, the top two are Delaware and the Eastern District of Texas, with 28% and 18% of the total material cases respectively.1 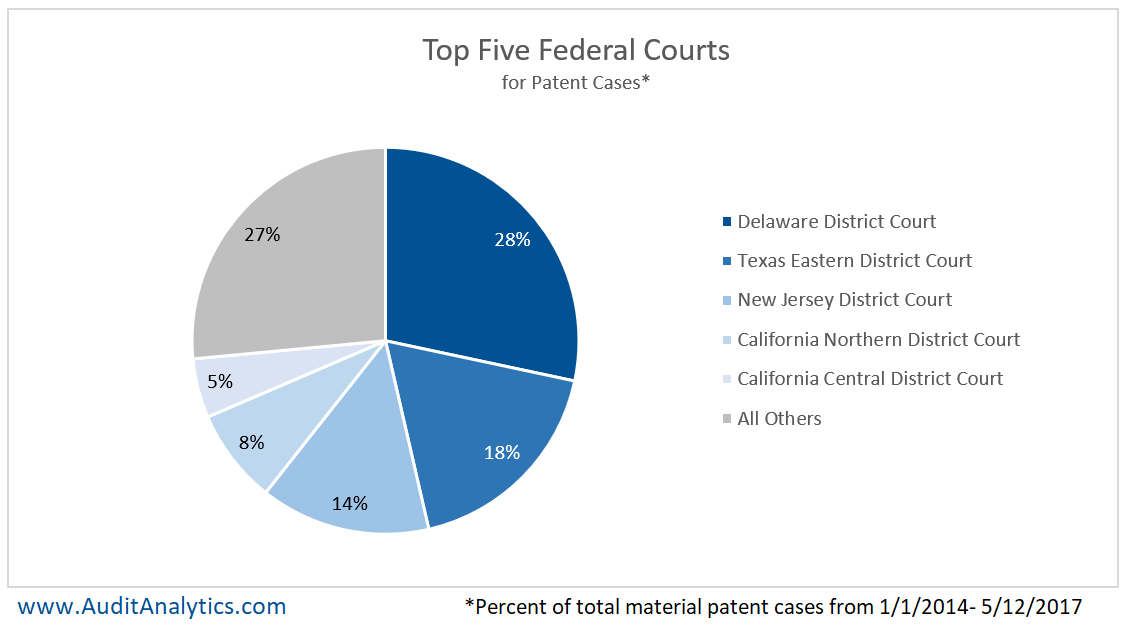 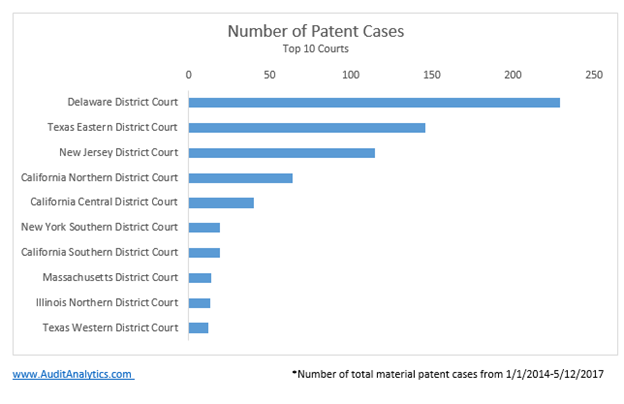 However, the options for venue will not depend on state of incorporation alone. Because of §1400(b)’s provision for venue “where the defendant has committed acts of infringement and has a regular and established place of business”, there may be several venue choices for patent litigation defendant corporations with offices in multiple states.

Perhaps the impact will be felt the most for smaller companies with only a few offices, and the ruling will have less impact upon larger SEC public filers. Only time will tell.

1. Note: This post has been updated to correct previously reported percentages and to incorporate changes to the original pie chart, which did not include “All Others.”↩