The PCAOB recently published a new Report on Emerging Growth Companies (EGCs). The EGC filer status was a provision of the Jumpstart Our Business Startups Acts (JOBS Act) of 2012 which was intended to improve access to capital markets for small businesses. The hope was that by removing market barriers more small private companies would be willing and able to access public markets and in turn, grow.

The SEC defined an EGC filer as a company with annual revenues less than $1 billion that has not sold common equity securities on or before December 8, 2011. As the PCAOB report states, companies retain the EGC label until one of the following occurs: 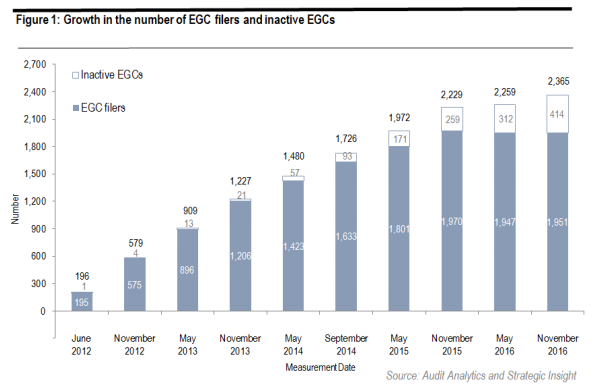 The EGC filer status has made an impact. As the graph above shows, the number of EGC filers grew rapidly and have leveled off over the last year. There were 1,951 companies that identified themselves as EGCs as of November 2016. Further, EGCs represent 15% of exchange listed companies. Of companies that issued audited financial statements, roughly 96% of EGC filers were audited by a firm who also audits non-EGC filers.

Unfortunately, not everything is good news. Just over half of EGC filers were issued a going concern opinion in their audit opinion. Also, of companies that provided a Management’s Report on Internal Controls over Financial Statements, just under half identified at least one material weakness.

This shouldn’t come as a surprise, though. EGCs often lack resources. Roughly 50% of EGC filers reported zero revenue in their most recent filing. The two top industries for EGC filers were Pharmaceutical Preparations (11%) and Blank Check Companies (8%), both of which often report zero revenue until they are out of their development stage.

The EGC status is still relatively new and its effects are still being learned. The PCAOB plans to update their white paper “with the most recent data available as of May 15 and November 15 in each year.”

For more information on EGC filers or for an online demonstration, contact us at info@auditanalytics.com.