Last week rumors hit the Street that BNP Paribas (EPA:BNP), one of the largest French banks, would settle with the US Department of Justice for a record $5 billion (or even $10bn, according to different sources). BNP is also facing criminal charges, and at the moment it is not clear whether such a heavy cash penalty would deplete cash reserves and hinder the company’s compliance with capital ratios.

It is the largest settlement of its kind. In fact, it exceeds the sum total of similar settlements since President Obama took office. What is the charge? That BNP violated sanctions imposed on various countries that support terrorist activities: Sudan, Iran, Cuba, Syria, and North Korea are on the list. Companies that violate trade restrictions are subject to heavy penalties. Further, many institutional investors and pension funds have made it a policy not to invest in the companies that violate sanctions.

Not surprisingly, the SEC requires disclosure of charges related to the violations of the anti-terror laws and regulations, and the adequacy of such disclosure is a common subject for SEC comment letters. In this case the SEC would rely on several methods for discovery of potentially undisclosed violations. As simple as it sounds, a Google search of a company name combined with ‘Iran’ or ‘Sudan’ may reveal an alleged link. Also, perusal of a company web site may reveal a phone number with an Iranian country code, or the name of a Sudanese partner or subsidiary. Such a finding would warrant a special scrutiny by the regulators, which would typically result in a comment letter requesting full disclosure of the company’s operations in terrorist-sponsoring countries.

Here are two examples from a comment letter of this sort:

1. You state in your annual report that you operate scheduled flights to Iran. We note from your website that your customers can purchase flights to and from Iran and Sudan. Iran and Sudan are identified by the U.S. Department of State as state sponsors of terrorism, and are subject to U.S. economic sanctions and export controls. Please describe to us the nature and extent of your past, current, and anticipated operations in, and other contacts with, Iran and Sudan, whether through subsidiaries, business partners, or other direct or indirect arrangements. Your response should describe any equipment, components, technology, services, or fees you have provided to Iran and Sudan directly or indirectly, and discuss whether you have offices, facilities, sales agents, ground staff, or other employees in Iran and Sudan, and the extent to which your dealings or arrangements have been with the governments of Iran and Sudan, or entities controlled by those governments.

2. Please discuss the materiality of the contacts with Iran and Sudan described in response to the foregoing comment, and whether those contacts constitute a material investment risk for your security holders. You should address materiality in quantitative terms, including the approximate dollar amounts of revenues, assets, and liabilities associated with each of Iran and Sudan for the last three fiscal years and the subsequent interim period. Also, address materiality in terms of qualitative factors that a reasonable investor would deem important in making an investment decision, including the potential impact of corporate activities upon a company’s reputation and share value. As you are aware, various state and municipal governments, universities, and other investors have proposed or adopted divestment or similar initiatives regarding investment in companies that do business with U.S.-designated state sponsors of terrorism. Your materiality analysis should address the potential impact of the investor sentiment evidenced by such actions directed toward companies that have operations associated with Iran or Sudan.

As follows from the table below, 144 different companies received similar comment letters in 2013. In 2012 the number was 147. The industries of the companies vary. The selection above, for example, comes from a Chinese airline. Overall, the number of SEC inquiries related to this topic has been pretty consistent over the past five years. 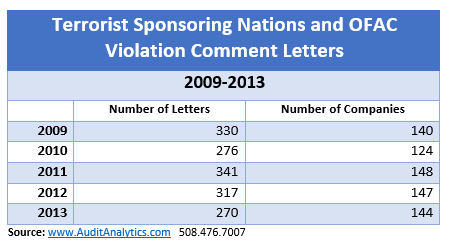 The SEC clearly takes this issue very seriously. On January 14, 2013, the SEC began to require all companies that have material operations in the countries listed above to file a special form known as an “IRANNOTICE”. (What the form will be called if Iran is eventually removed from the list of terror-sponsoring countries we do not know.) In 2013, the first year of the requirement, 374 companies filed this form. Already in the first quarter of 2014, an IRANNOTICE was filed by 124 companies.

While violations of the order of magnitude of BNP Paribas are unlikely to be discovered and investigated solely by SEC, comment letters may provide additional information for the investors and may be used in making investment decisions.