When the European Union recently enacted sweeping regulation of the auditor market, requiring, among other things, auditor rotation at least every 20 years, one of the stated goals was to increase competition in the market.

The hope was two-pronged: first, that more frequent changes would de facto increase competition; second, that the dominance of a small handful of firms might lessen due to the increased churn and competition.

Many stakeholders are intently monitoring the market now that the major provisions of the regulation are coming into play. With an eye towards establishing a baseline to compare future developments against, this post looks at the market share from 2014 to 2017 among companies listed on select European exchanges.1

Our findings show that the market concentration, as measured by the percent of the market audited by the Big Four, varies greatly between different countries. 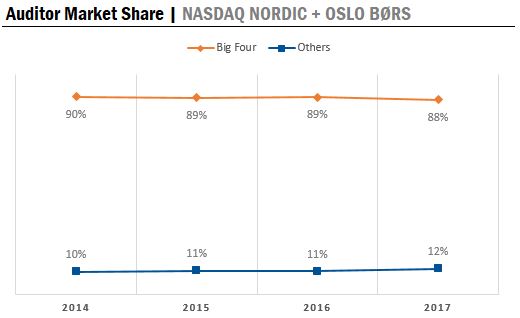 The market concentration in these countries is heavily skewed towards the Big Four, averaging 89% over the period under review. Since 2014, however, there has been a slight downward trend in market share of the Big Four, from 90% to 88%.

Next, let’s look at the Euronext Paris exchange. 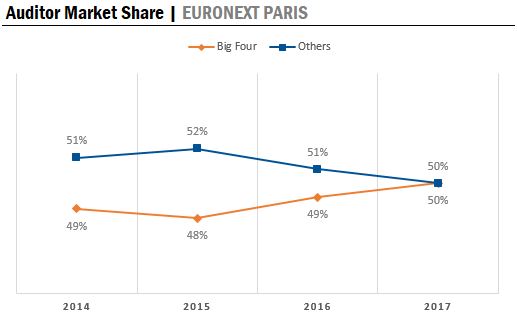 Here, we see a very different state of affairs. In 2017, the Big Four shared the market equally with all other firms. In France, Mazars is actually in the top four by client count. 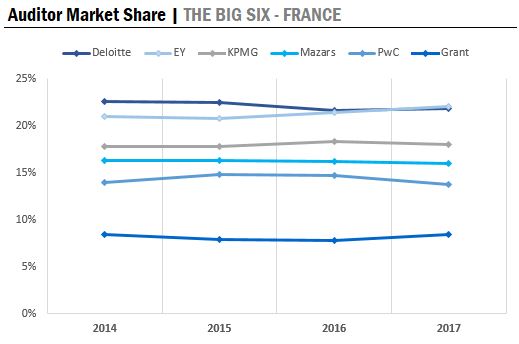 While the difference here could partly be cultural, the joint audit requirements in France certainly contribute.

When looking at the London Stock Exchange, here the market is less concentrated than in the Nordic and Baltic countries, but much more so than in Paris. (For purposes of this analysis, we exclude the companies listed on the Alternative Investment Market, or AIM.) 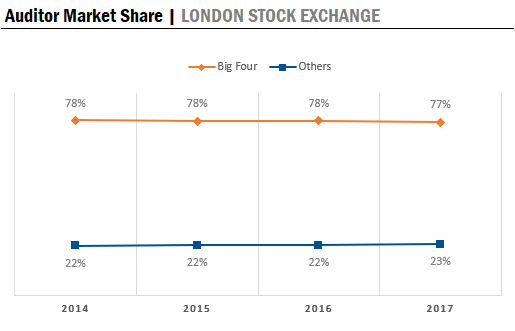 The trend in Italy is closer to that in the Nordic countries than to France or the UK. 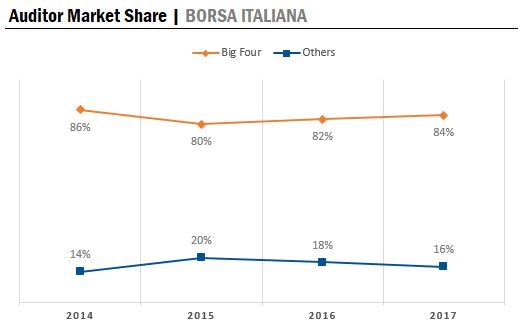 The Big Four, again, have a commanding large share of this market, averaging 83% by client count. After a decrease from 2014, the concentration has increased since 2015.

Germany presents something of a middle ground between the scenarios described above. The market is not completely flat between the Big Four and the rest, nor is it as concentrated as in Italy and the Nordic countries. 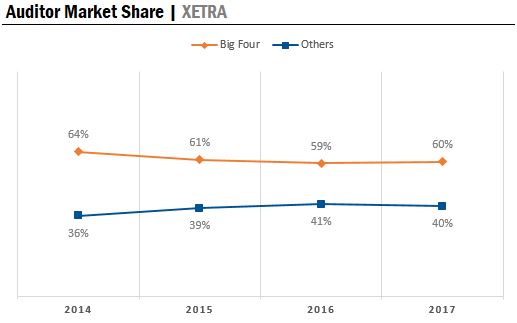 It will be interesting to continue monitoring these trends. One area for further research would be to isolate only the Public Interest Entities that must comply with the rules to see whether starker trends appear in the subset of the market.

This blog is the second in what will be an ongoing series investigating changes in the audit market in the EEA. For more information about this post or our European databases, please contact us at info@auditanalytics.com.