Non-GAAP is the issue du jour, and the past month stuck with the theme. One of the most significant bits of news came directly from the SEC. On May 17, the watchdog released an additional interpretation of Regulation G, which comprises the rules that govern the use of non-GAAP metrics in financial reporting. The release does not constitute new regulation, but instead clarifies the SEC’s position, in particular, when it comes to the use of “misleading” financial metrics.

Recent SEC speeches have given a strong indication that, while the use of non-GAAP metrics is neither prohibited nor discouraged, the SEC will be reviewing non-GAAP disclosures in more detail. But companies that may be in violation of Regulation could have some breathing room.

On May 18, during the PCAOB’s Standing Advisory Group meeting, Mark Kronforst, Chief Accountant in the SEC’s Division of Corporation Finance, stated that “this next quarter will be a great opportunity for companies to self-correct.” As part of the same meeting, the PCAOB released a white paper that discussed the auditor’s responsibility for non-GAAP presentations.

One take away from these recent statements is that, in the current environment, a lack of compliance with non-GAAP rules could be perceived as a significant regulatory risk. Not surprisingly, many large law and accounting firms chose to proactively release briefings to their clients. To name just a few, see summaries released by Shearman Sterling and Deloitte.

Most of the recent discussions and speeches have addressed concerns about aggressive presentation of tailored metrics in earning releases, but non-GAAP measurements are also common in other corporate disclosures. Let’s take a look. 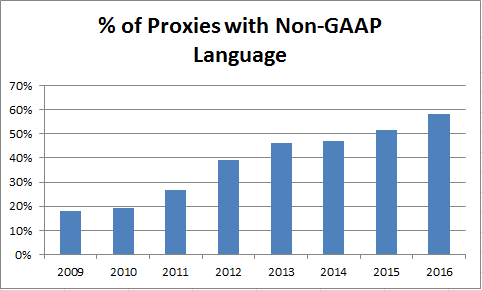 In a recent WSJ article, “CEO Bonuses: How Pro Forma Results Boost Them”, author Justin Lahart discussed some potential dangers involved in using non-GAAP metrics to set compensation targets. One is that they could allow management to skirt bad decisions and poor performance. According to the article, some commonly excluded items, e.g., lay-off related charges, are in fact directly related to management’s performance and should not be excluded for the compensation purposes.

In another example, in February 2016, Brixmor Property Group (BRX) disclosed that, in certain instances, the company used Same Store NOI (a non-GAAP metric that excludes certain rent operating expenses) to smooth results over interim periods. The misstatement was not material to the GAAP results and restatement was not required. Yet, as was reported in a Market Watch article, since a similar metric was used in the determination of executive compensation purposes, some analysts wondered whether executive bonuses possibly incentivized the smoothing. Three top executives were forced to resign subsequent to the misstatement, and, according to the most recent BRX proxy, the bonuses might be subject to clawback provisions should executives “breach certain provisions of the agreement”:

Each of Mr. Carroll, Mr. Pappagallo and Mr. Splain and the Company entered into a separation agreement and release in connection with their resignation. These agreements provided, among other things, that subject to the Company’s right to claw back in the event the executive breaches certain provisions of the agreement or is found to have violated federal securities laws, the executive will receive shares of common stock or operating partnership units underlying RSU awards and LTIP awards, the performance period for which has been completed and performance targets achieved, assuming achievement of Company performance metrics at the target level and assuming individual goals are not achieved. In addition, Mr. Carroll’s agreement provided that he will receive operating partnership units underlying an LTIP award that relate to a Company performance objective that has already been achieved, subject to such performance objective remaining achieved at December 31, 2016. For additional information concerning the separation agreements, see our Form 8-K filed February 8, 2016.

To be clear, there is nothing wrong with using custom targets. Executive compensation plans frequently combine GAAP, non-GAAP, and operational metrics. The performance targets aim to align executive payout with the long-term interests of shareholders and, in many cases, GAAP alone is neither comprehensive nor flexible enough to achieve this goal. Moreover, just as with GAAP, the inability to reach non-GAAP goals could lead to forfeited NEO bonuses. To illustrate, let’s take a look at the Oracle’s (ORCL) compensation plan that used growth in non-GAAP pre-tax profits as a performance metric.

Between fiscal 2014 and fiscal 2015, our non-GAAP pre-tax profits did not grow. Consequently and consistent with our results-aligned compensation philosophy, the bonus payment was zero ($0) for each of Mr. Ellison, Ms. Catz, Mr. Hurd and Mr. Kurian.

Interestingly, Regulation G has only limited applicability to the proxy statements. Different sections of the proxy statement have different rules regarding the use of Non-GAAP. In the compensation section, for example, companies need only to explain how non-GAAP compensation targets are calculated. This differs from the requirements of using non-GAAP metrics in earnings releases, where companies must provide a table that reconciles the non-GAAP metric back to its original GAAP amount, and comparable GAAP metrics must be presented with equal prominence.

The use of non-GAAP metrics in other areas of the proxy statement must comply with rules more like those for earnings releases; for instance, in explaining pay-for-performance practices.

Question 108.01 in the most recent SEC non-GAAP Compliance & Disclosure Interpretations provides some clarity.

Question: Instruction 5 to Item 402(b) provides that “[d]isclosure of target levels that are non-GAAP financial measures will not be subject to Regulation G and Item 10(e); however, disclosure must be provided as to how the number is calculated from the registrant’s audited financial statements.” Does this instruction extend to non-GAAP financial information that does not relate to the disclosure of target levels, but is nevertheless included in Compensation Discussion & Analysis (“CD&A”) or other parts of the proxy statement – for example, to explain the relationship between pay and performance?

In some cases, companies even use modified non-GAAP metrics between their different SEC filings. Take, for example, the following statement found in Mallinckrodt’s (MNK) most recent proxy statement. Mallinckrodt uses Adjusted EPS, Net Sales Revenue, and Free Cash Flow as performance metrics, but not in the same way as they are used in their earnings releases  (emphasis added).

The performance measures used for compensation purposes include non-GAAP financial measures which exclude the effects of anticipated items which the HRCC believes do not represent ongoing operating results and/or business trends of the business. The categories of these anticipated items included certain restructuring charges, revenue adjustments related to businesses exited or sold, acquisitions, goodwill or other intangible asset impairment charges, shareholder and other litigation charges, certain legacy tax matters and costs related to separation. These measures as used in our executive compensation programs exclude certain charges that are included within the comparably-titled non-GAAP financial measures included in our quarterly earnings releases. In calculating fiscal 2015 results, the HRCC also excluded the unanticipated impact of foreign currency fluctuations and actions taken to improve the long-term value of certain assets.

With all the confusion and variations in practice, it’s no surprise that non-GAAP issues just keep popping up.