Note: This post has been updated to include the full, unabridged FactSet article made available on November 12, 2018.

General Electric Co [GE] released an update on April 13, which among other things, clarified issues related to the adoption of the new revenue recognition standard.

GE provided two relevant pieces of information (both were previously disclosed during the January conference call). The first piece was related to the impact of the new revenue recognition rule and the second was related to the SEC investigation.

The volatility following the report’s release is a bit of a surprise. The sharp swings in stock price following the release of the annual report indicate that the market had difficulty digesting the news. Part of that volatility could be explained by how GE discussed its revenue recognition practices.

GE provided two relevant pieces of information (both were previously disclosed during the January conference call). The first piece was related to the impact of the new revenue recognition rule and the second was related to the SEC investigation. As we discuss below, the ASC 606 impact is not a result of incorrect financials. And, while a SEC investigation is typically unwelcome news for a company, investigations do not always result in material error corrections.

Because of the new ASC 606 rule, which standardizes and simplifies how companies record revenue in customer contracts, all companies are required to disclose what changes they’ll need to make to past earnings statements and how they will implement those changes.

GE said they’ll use the full retrospective method. The full retrospective method is in many cases preferable from an investors’ standpoint because it provides a historical perspective and shows by how much past financials are affected. But in a quest for transparency, GE may have inadvertently spooked investors with the language they used. In the 10-K filing and during the conference call, GE used the word “restated,” which may have been what raised eyebrows (bolded emphasis is ours):

Although GE used the word “restated,” what they’re doing is a technical implementation of the new revenue recognition rule. This is not a restatement in the classic accounting sense, which normally raises red flags because of its negative connotations. The word restatement is often used to describe errors identified in the prior financial statements.

We think the media and investors should have noted another disclosure related to revenue recognition, one that we believe is more of a red flag than the well-publicized accounting changes because of ASC 606. Tucked away in the 10-K filing is this statement (bolded emphasis is ours):

The SEC notified GE in November about their investigation- and GE publicly disclosed it a few months later during the January conference call.

The SEC investigation focuses on accounting for long-term contracts. Contract accounting is a complex issue that presents challenges to all parties involved, including companies, analysts, and auditors.

One of the problems with contract accounting is that it relies heavily on estimates and analysts have very little visibility into the estimation process. Another problem is that contract estimates are subject to frequent re-evaluation which can cause significant swings in both revenue recorded and net income.

Although GE is no exception in recording substantial changes in contract estimates, there is one interesting distinction between GE and other companies that use contract accounting- the frequency.

While most companies disclose contract estimates on a quarterly basis, GE, for the most part, discloses estimates on an annual basis (which is why we see eight [seven annual and one quarterly] changes in estimates for GE in comparison to 20+ for some other companies).

The impact on pre-tax income of GE’s contract accounting estimate changes seemed to accelerate in the past few years. 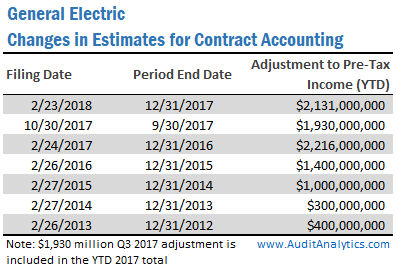 As with our previous articles, we are not suggesting that GE or any other company is manipulating the earnings with large positive adjustments. Instead, we are merely noting that contract accounting is a risk area because of the complexity. Schilit and Perler, in their classic book on accounting gimmicks, note that this method of revenue recognition is notoriously difficult to get right, and the nature of the method allows for ample “wiggle room”, even under GAAP.

The new ASC 606 accounting method will change some of GE’s contract accounting from over-a-period-of-time to a point-in-time, reducing estimates.

Based on the limited disclosure we’ve seen so far, we cannot estimate the probability to any of these outcomes; however, it’s possible because of the way GE reported its ASC 606 revenue recognition implementation and blended in the SEC investigation, the market has already incorporated the worst possible outcome in share prices. Only time will tell.

A version of this article was previously available on FactSet to subscribers of our Accounting Quality Insights. For more information, email us at info@auditanalytics.com or call (508) 476-7007.