Does the timing of an auditor change have any significance? Since the majority of companies have a fiscal year end date on or around December 31, the expectation is that the majority of changes would occur around the filing of the annual report in March or April. We looked at auditor changes reported by the Russell 3000 from January 1, 2012, through December 31, 2016, and found that 31% of the changes were made in March and April. 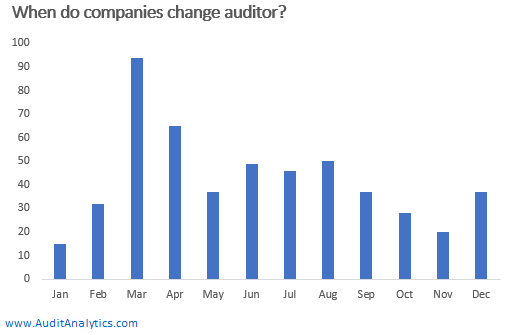 Although not all companies have a FYE of December 31, we would still expect most companies to change their auditor sometime within 180 days of the end of the fiscal year. During this period, the audit opinion is issued, the annual report is filed, and most board and annual meetings take place. Unsurprisingly, 62% of the auditor changes fell within this 180 day time frame. Fourteen changes were reported prior to the end of the fiscal year, but the change was not effective until the completion of that year’s audit.

For the most part, the 175 changes made more than 180 days after the fiscal year end were routine. However, there were six companies that disclosed a restatement when reporting the auditor change. Universal Insurance Holdings, Inc., reported a restatement but the auditor change was unrelated. When Blackman Kallick, LLP and Plante & Moran PLLC merged, the company engaged Plante & Moran PLLC as their new audit firm. This was one of thirteen changes outside the 180 day time frame related to a merger or acquisition of an audit firm. There were also eleven changes made due to mergers and acquisitions involving the company.

Of particular interest were the eighteen changes made within 30 days of the fiscal year end. Two instances stood out as being unusual because they disclosed a disagreement between the company and the auditor.

BDO USA  resigned twenty days before the end of Osiris Therapeutics, Inc.’s fiscal year. In an 8-K filed December 17, 2015, the company disclosed that, during the preparation of their quarterly report for the Q3 2015, they and BDO disagreed about the timing of revenue recognition under certain distributor contracts and the related internal controls over financial reporting. While the company ultimately implemented BDO’s recommended changes for that and subsequent periods, this disagreement led to a restatement of the interim financial statements for the first two quarters of 2015 as well as BDO withdrawing their opinion on the effectiveness of internal control over financial reporting.

In the second case, Suffolk Bancorp dismissed Grant Thornton after the end of the 2011 fiscal year (before the audit opinion was issued) and engaged a new firm to perform the 2011 audit. The company disclosed that there was a disagreement with Grant Thornton about management’s methodology of calculating the ASC 450, (contingencies component of the allowance for loan and lease losses) but specifically noted that this disagreement was not a factor in the decision not to engage Grant Thornton to audit the fiscal 2011 financial statements.  In a press release dated January 5, 2012, President and CEO Howard C. Bluver noted

We at Suffolk have made this decision in connection with our movement into a new chapter of our company’s life, and it is not a result of any disagreement with our prior accountants on any matter of accounting principles or practices, financial statement disclosure, or auditing scope or procedure.

Overall, it seems that companies adhere to a pattern when timing their auditor changes. While deviations to this pattern do not necessarily indicate anything out of the ordinary, in some cases, paying attention to when a company changes its auditor may clarify the “why”.