With the 2017 proxy season in the rearview mirror, pretty much every major US company has reported fiscal 2016 audit fees by now. As we reported last year, audit fees on the whole have remained relatively flat for the past decade or so. But for various reasons, whether due to a major accounting event such as a large restatement, or a major acquisition, some companies might expect a bigger bill than normal. So, who were the big movers in audit fees compared to fiscal 2015?

In the table below, we show the top ten largest increases in audit fees for fiscal 2016 compared to fiscal 2015. 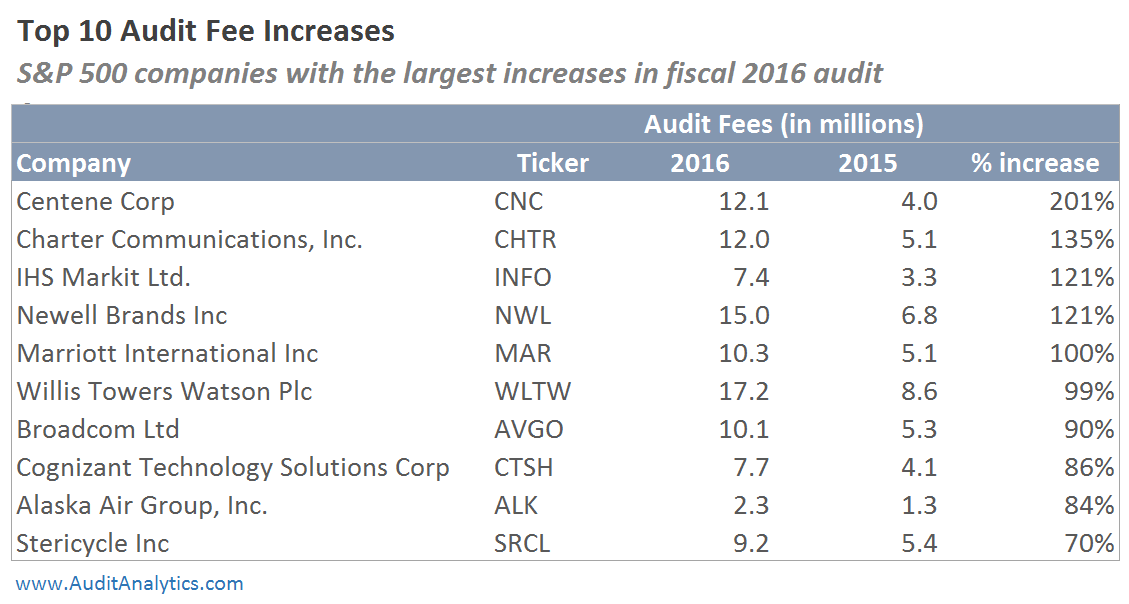 Centene Corp saw the largest increase, a whopping 200% from $4 million to $12.1 million. This increase coincides with a significant jump in revenue.

In the chart below, we calculate a range of “expected fees”, based on the range of the ratio between audit fees and revenues for companies listed in the S&P 500. Using Centene’s revenue, which jumped from about $8 billion in 2012 to over $40 billion in 2016, we calculated a band of expected fees between the 25th and 75th percentiles of the percentage of audit fees to revenue. 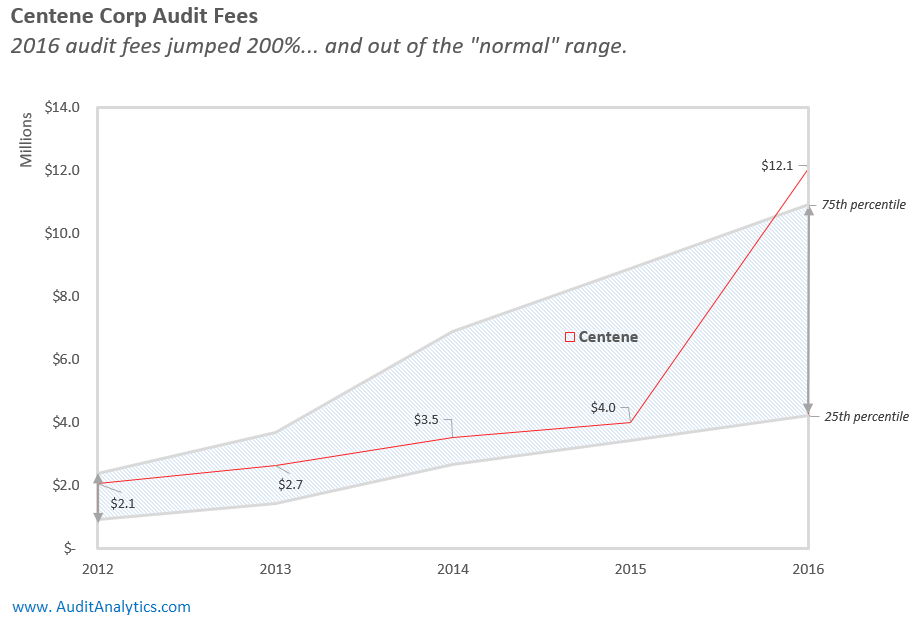 This large jump seems fully to coincide with the increase in the company’s revenue. There were no major accounting events, such as a large restatement or an adverse SOX 404 finding, that might contribute to such a large increase in audit fees.

Most of the rest of the top 10 had somewhat recent material mergers or acquisitions. Charter had Time Warner, IHS and Markit combined, Newell Brands bought Jarden Corp, Marriott and Starwood joined forces, as did Willis and Towers Watson, while Broadcom picked up LSI Corp and Alaska Air bought Virgin America. Acquisitions of this size can be expected to contribute to increases in audit fees. (For our AQRM red flag model, we don’t flag significant increases in audit fees when there was a recent material merger or acquisition.)

For two companies, though, namely Cognizant and Stericycle, it appears as though accounting-related issues could have been the primary drivers. Cognizant’s auditors found a material weakness in the company’s SOX 404 Internal Controls over Financial Reporting during the fiscal 2016 audit, citing weak “tone at the top” and the possibility of improper payments (bribes) in overseas projects.

The increase in audit fees from 2015 to 2016 was principally due to increased audit work in connection with matters that are the subject of the Company’s ongoing internal investigation that is being conducted under the oversight of the Audit Committee, with the assistance of outside counsel, focused on whether certain payments relating to Company-owned facilities in India were made improperly and in possible violation of the U.S. Foreign Corrupt Practices Act and other applicable laws.

Stericycle had a number of issues, including late filings, a major Item 4.02 restatement, and control weaknesses of their own.

At the other end of the spectrum, we can look at the ten companies with the largest decreases in audit fees. 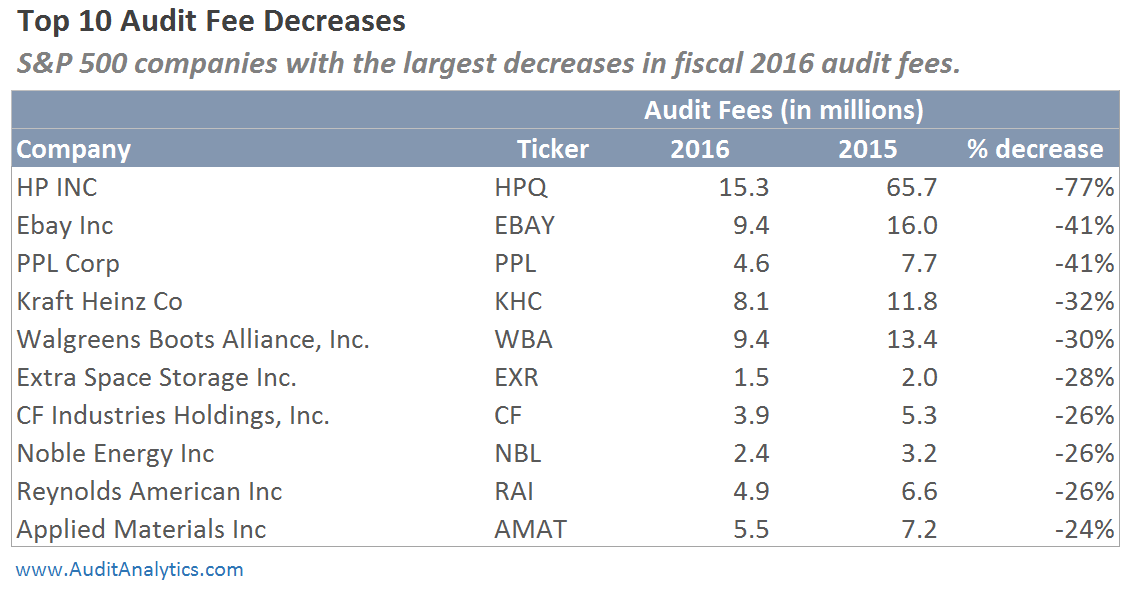 HP saw the biggest decrease in audit fees from fiscal 2015 to fiscal 2016, dropping 77% from $65.7 million down to $15.3 million. The likely explanation for this is the spin-off of Hewlett Packard Enterprise (HPE). Combined, the two companies had total audit fees for fiscal 2016 of $52.8 million, which would only be a decrease of about 20% – still a lot, but not quite enough to make the top 10 list of largest decreases.