It’s bound to make some waves when a company announces an impairment as sizable as the one HP recently announced with respect to their acquisition of Autonomy. And if the impairment is associated with alleged fraud committed by former executives or board members of an acquired company, the waves get bigger.

A number of recent research studies postulate that financial restatements have negative implications for stock performance. One of these studies was conducted by Audit Analytics in 2008. The study found that although different types of restatements had different effects on the stock price, for all of them the following statement holds: for the fifty days preceding the restatement, the company stock would underperform the market.

This leads us to believe that restatements are just a canary in a coal mine – and by the time the restatement is issued, the canary is already dead.

On the other hand, stock prices often rebound after a restatement announcement; and even more, can even outperform the general market. One possible explanation for this effect is that in such a case everybody, including the company leaders, is aware that serious changes are necessary. In addition, having bad news finally out of the door helps the over-sold stock to gain some ground.

Why are restatements perceived as such a bad thing? First, they imply that the company’s financial statements up to that point have been unreliable. Second, when upper management is involved, a restatement raises serious concerns about company leadership, and therefore about the company’s overall health.

It’s true that HP’s impairment announcement wasn’t technically a restatement, since it did not involve the correction of prior financials. But still, who would trust a company that just wiped out over $8B worth of a very recent acquisition? How might such a valuation error have occurred? And why wasn’t the error discovered until November?

Unfortunately, HP’s problems started some time ago. A questionable HP-Compaq mega-merger in 2003; a parade of CEO departures; a shrinking PC market, tough competition and an apparent lack of clear direction; all these have spelled trouble for HP. In short, there are some striking similarities between HP and some of the companies that announced mega-million restatements in the past.

To see how far the similarities go, we can look at HP’s stock behavior. The graph below takes the day of impairment announcement as an origin and shows relative price changes of HPQ and SPY (SPDR® S&P 500® ETF) 100 days before and after the announcement. 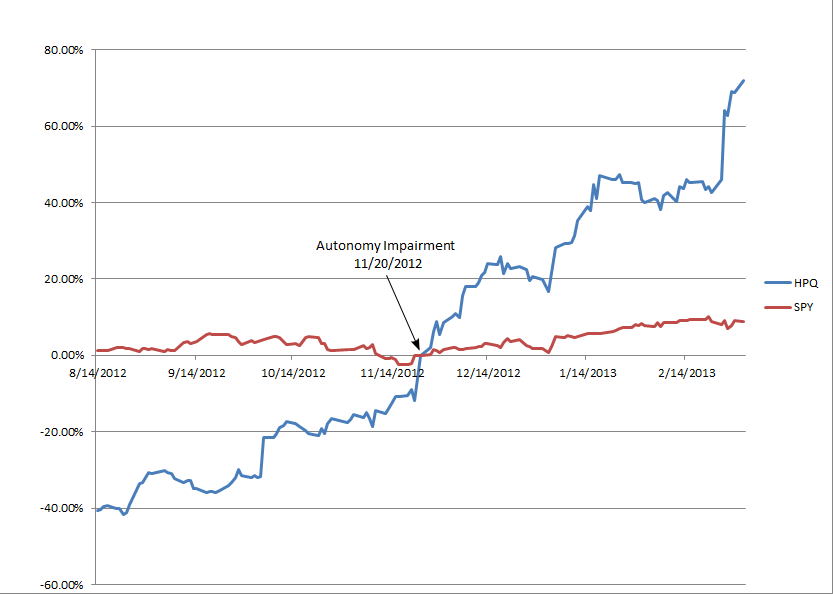 Taking this in tandem with the table below, we can see clearly that HPQ underperformed the SPY during the 100 days before the announcement. From November 20 to August 10, 2012, the SPY held fairly steady, while HPQ lost more than 40% of its value. But the announcement day was the pivotal point: during the following 100 days, the stock climbed by more than 70% — effectively returning to where it was in August — while the SPY had a much more modest gain of about 8%.

If we take the entire 200-day window, SPY was the winner, gaining 7.65% versus HPQ’s 2.35%; but for the post-announcement period, few stocks could match HPQ’s performance.

Even though HP’s stock gained some ground (a new Android-based tablet announcement at February 24, 2013 definitely helped), it is unclear whether it can keep the momentum. The problems at HP are still far from being solved.