Fiscal Year 2008 saw the highest number of going concerns filed. This is not surprising. There was a global liquidity crisis at the time, and the capital markets essentially froze; while a deep global recession precipitated a drop in consumer and government spending. It’s no wonder that a record number of companies were at risk of ceasing operations. 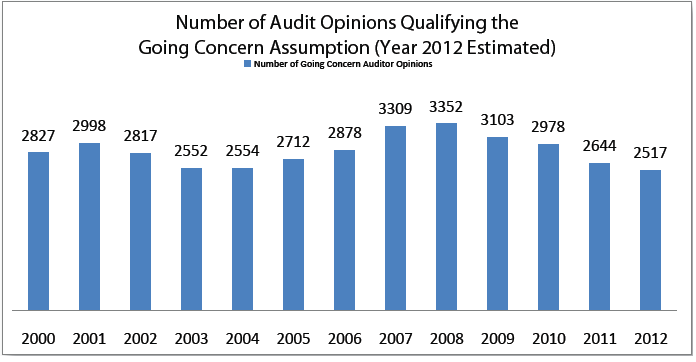 Since the peak in 2008, however, the number of going concern opinions has decreased with each consecutive year. At the time Audit Analytics compiled its report in in July 2013, the number of new going concerns filed for fiscal year 2012 was estimated to be 543, the second lowest in thirteen years. And, as the chart above indicates, the total number of going concerns was estimated to decrease to 2,517, making 2012 the lowest year on record since we started tracking this data.2

While this appears to signal an improvement in public company health, the picture changes if we consider further details. For example, 228 companies that filed a going concern in 2011 — almost 9% of the total — went on to file a termination of registration with the SEC. So the drop in the total number of going concern opinions in 2012 is due not only improvements in company fiscal health, but also to company attrition.

Further, when we look at the number of going concerns as a percentage of filers, the picture is not exactly rosy. By this metric, as the chart below indicates, the last six years are the worst under review. While the percentages have also decreased each year since 2008, they are still elevated compared to historical levels. 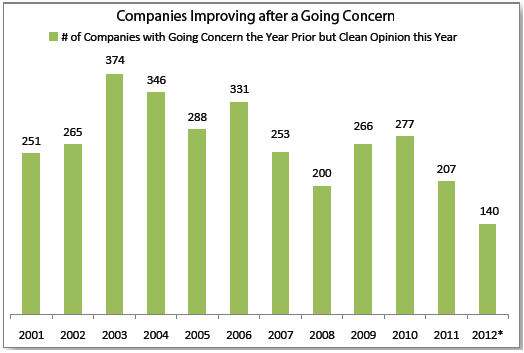