A year ago, Audit Analytics analyzed shareholder activism as reported by Schedule 13D filings. Form SC 13D is filed with the Securities and Exchange Commission within 10 days whenever a person or group has attained a greater than 5% position in any class of a company’s securities and retain the right to take an activist role. Audit Analytics tracks disclosed disputes, actions and intentions of activist shareholders as disclosed in SC 13D filings.

Last year’s analysis focused on SC 13D filings for firms comprising the annually reconstituted Russell 3000 Index across 2005-2012.1 After updating the data to include SC 13D filings up to the present, our analysis shows that 2013 saw a 46.15% increase for filers either reporting a disposition of shares or the intent to sell shares.

An analysis of Insider trading — not to be confused with shareholder activism — has also flown a ‘red flag’ over the market, in the form of an uptick in insider share divestiture. In a recent Barron’s article that cited a study of insider behavior conducted by the University of Michigan’s Nejat Seyhun, it was reported that ‘true’ insiders (i.e. company officers & directors, as opposed to external parties meeting the SEC’s definition of ‘insider’) disposition of shares has risen in the later portion of 2013. Could both trends be viewed as a sign that the market is getting overheated?

Whereas trends in shareholder activism and insider trading are both lagging indicators, there is a market for strategies built on events publicly disclosed by activists and insiders. The latest edition of Fortune points out that major institutional investors are piling into activist hedge funds. Catalyst Funds, for example, operates several mutual funds that focus on insider trading. The funds’ Advisor utilizes qualitative research based upon SEC Forms 3, 4, & 5 (i.e. the forms used by insiders) in conjunction with quantitative research in an effort to meet the various Catalyst funds’ investment strategies.

Interestingly, there exists an event-driven mutual fund that tracks 13D filings as its primary investment strategy: the 13D Activist Fund. A fairly young fund (operations commenced 12/28/11), the fund has $133.1M in assets under management. As of 11/27, Class A shares for the fund are up 32.46% for the year and 27.87% since inception. For comparison, the S&P 500 Total Return Index achieved a 29.22% and 23.91% return for the same respective periods.

Audit Analytics reviewed the holdings for the 13D Activist Fund for the last four quarterly reported filings, noting that the fund had holdings in 48 issuers. Using those 48 issuers corresponding to the fund’s holdings over the past year, an analysis of 13D filings since 4/1/13 yields the following results.2 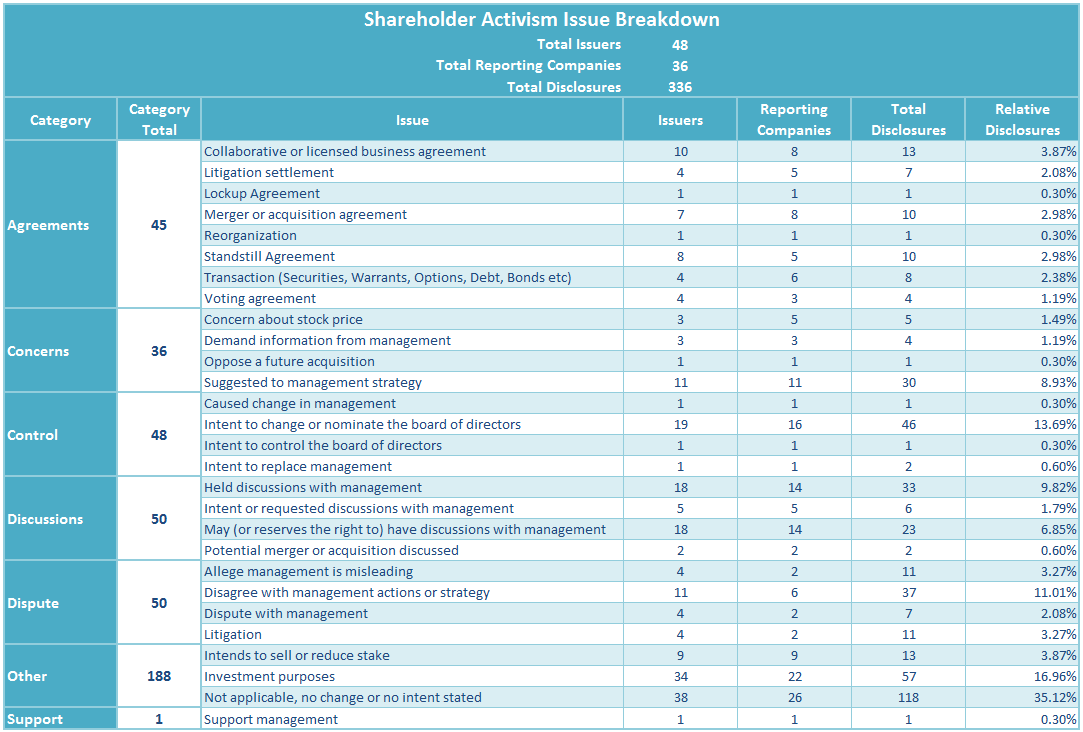 The issues listed above represent Audit Analytics’ classification of issues disclosed in Form SC 13D’s Item 4 “Purpose of Transaction”. Note that our analysis of the 48 issuers held by the 13D Activist Fund yielded relatively few disclosures where the issue of ‘Disposed of investment’ or ‘Intends to sell or reduce stake’ were listed in the original filings. Of particular interest in our analysis of SC 13D’s for the fund’s holdings were the issues of ‘Intent to change or nominate the board of directors’ and ‘Disagree with management actions or strategy.’ Noteworthy activist Carl Icahn filed a whopping 54.43% of filings reporting these two issues. 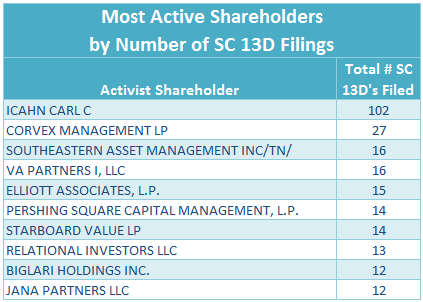 Not surprisingly, Carl Icahn and Bill Ackman’s Pershing Square Capital Management, L.P. are among the top ten activists listed in our review. Further analysis reveals some interesting aspects pertaining to the 13D Activist Fund’s holdings. One of the fund’s best performing holdings for 2013, Take-Two Interactive Software, dropped by 5% after the November 26th announcement that Take-Two had agreed to repurchase all of Icahn’s shares in the game-maker. Icahn’s designees on the Take-Two board subsequently resigned. Shares of ADT Corp. (held by the fund in the past three reported quarters) dropped steeply on November 25th with the news that ADT repurchased shares held by Corvex Management LP. In conjunction with the repurchase agreement, the founder and managing partner of Corvex Management LP recently resigned from the ADT Corp. board of directors. Corvex’s founder, Keith Meister, is a former Icahn lieutenant who served as CEO of Icahn Enterprises G.P. Inc. prior to founding Corvex. Earlier in November, Transocean announced a deal with its largest shareholder, Carl Icahn, to offer a $3-per-share dividend. Cracker Barrel, on the other hand, declined to grant Biglari’s attempt to achieve a one-time $20 special dividend as well as a shake up the restaurant chain’s board. Relational Investors LLC scored handily earlier this year when the activist fund headed by Ralph Whitworth, a former protégé of T. Boone Pickens, managed to convince the board of Timken to spin off its steel unit. Shares of Timken were up 46% from the time Timken disclosed its stake in the ball-bearing maker through the day of the spin-off announcement.