Interviewing for a job is something almost everyone has experienced. Some have done more, others less, but either way it is a fairly routine matter. A candidate sends in a resume, prepares a narrative, dresses up, appears on time and the fun begins. After brief chit-chat about the weather, traffic, the recent Red Sox victory, the conversation finally turns into a Q&A.

For the most part, the topics covered are dictated by the resume – that is, everything the candidate mentions there is fair game. What’s on a resume is, of course, the whole truth and nothing but the truth. The interviewer has no interest in toppling a potential senior accountant by asking questions about Shakespeare and Chaucer, even though they majored in English literature a decade ago. So, the answers should not take long to come up with, should they?

We have all been in a situation where a seemingly trivial question made us put on our best poker face and mumble, “It’s a good question, let me think about it.” Should this happen once in an interview, we’d probably be fine. But what if every other question caused a hiccup like this? Is the candidate a little too nervous? Whatever the case may be, repeated long pauses can’t help but to leave the interviewer with an impression that something is amiss. Even a single long pause may be such an indicator, if the pause were unusually long.

SEC correspondence with public companies is in many ways similar to the interview process. Under the Sarbanes-Oxley Act of 2002, public companies have to undergo an SEC review process at least once every three years. Most of the questions the SEC asks in comment letters are routine, and the expectation is that the company will respond within ten business days by either amending a filing, providing the requested information, or advising when the requested information will be provided. For most companies, ten days is sufficient to provide the answer.

But in case ten days is not enough time to prepare a response, an extension is usually pretty easy to obtain. The reasons for the delay might be various mundane inconveniences, such as a year-end closing process or a CFO vacation. In cases like this, one extension is usually sufficient for the company to compile and send its response. Sometimes, however, we notice a different pattern – numerous extensions, often followed by a request to keep certain pieces of information confidential.

Confidentiality requests are granted based on Rule 83 (17 CFR 200.83) and in themselves are a completely legitimate way to protect a company’s business information from potential misuse by their competitors. Sometimes the information that is submitted to SEC may reveal such sensitive matters as company structure, pricing or business strategies, customer relation concerns, etc. Most competitors would gladly use this information should they gain access to it.

As an example, let us take a look at the communication that took place between the SEC and Bear Sterns in 2007 and 2008. As one can see from the table below, Bear Sterns requested an extension on October 24, 2007, and took an additional 126 days to respond. When the company finally responded on January 31, 2008, large sections of the answer were redacted based on a confidentiality request. 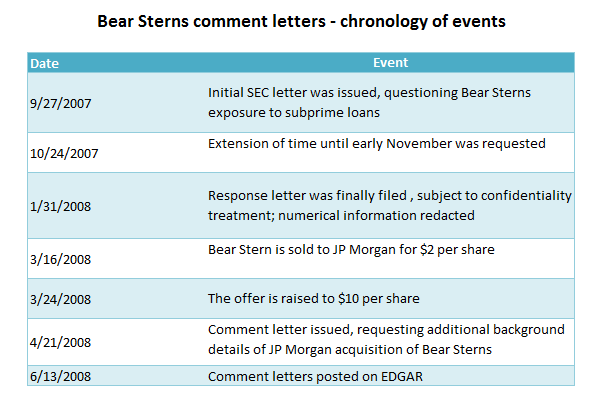 A subsequent SEC comment letter went unanswered even as the company was sold to JP Morgan in a bailout deal.

This is, to be fair, a dramatic example. In most of the cases, companies aren’t requesting extensions because they are facing their imminent demise. But, if we continue to look at the data, what can we make of numerous repeated extension requests?

In another example, Google used a similar tactic to avoid disclosing certain legal contingencies as it was named as a defendant in numerous DOJ and other regulatory investigations. Between June 7th, 2011 and January 25th, 2012, Google was involved in an extensive dialogue with SEC regarding the adequacy of reserves Google set aside to cover the many ongoing investigations. In one of the letters, the SEC requested Google to justify reserving half a billion dollars to settle false advertising claims. The DOJ alleged that Google knowingly engaged in false advertising of certain pharmaceuticals and, as part of the settlement, Google admitted the matter. In the comment letter, Google was asked to justify the reserved amount and explain why this amount was not recorded earlier. Other questions raised concerns about materiality and the extent of antitrust and Environmental Protection Agency investigations. At the time the last correspondence letter was filed, dated January 24th, 2012, Google had full information about the settlement conditions of the DOJ investigation, yet the company preferred to keep certain details confidential. During the 8-months course of the SEC review, Google filed four extension of time and four confidentiality requests.

The answers Google gave to the SEC were completely satisfactory and there were clear business reasons to request confidentiality. The choice of the method (delay and conceal) indicates, however, that Google considers potential litigation as a significant business risk. Since these confidentiality requests, Google was named as a defendant in a number of other high-profile legal cases, including antitrust and patent infringement suits.

The takeaway? If a company considers certain topic(s) sensitive and potentially risky for their business, the investors should also pay special attention to the topic(s) in question. Numerous extension and confidentiality requests in SEC correspondence could be an indicator of sensitive information and business risk.