As mentioned in our previous blog, 2014 SEC Comment Letters: Trends and Issues, the number of SEC comment letters (including both UPLOADs and CORRESPs) regarding 10-Ks and 10-Qs issued during the first six months of 2014 decreased about 25% compared to the same period in 2013. Although the numbers for 2014 may change considering these letters are released to the public no earlier than 20 days after completion of the review process, our data showed a decline in all but one of the major topics discussed.

In this post, we dive a little deeper into the details of these conversations, especially with respect to their prevalence across different industries. Still looking at all 10-K and 10-Q comment letters filed in the first six months of both 2013 and 2014, Audit Analytics sorted the data by SIC industry. Although each industry has its own top issues, we chose to focus on the twelve topics listed in our previous post for the sake of comparison.

In the analysis below, we provide a breakdown of these issues and their frequency among the four industries that received the most comment letters during the time frame, namely: Manufacturing; Services; Finance, Insurance & Real Estate; and Retail Trade. 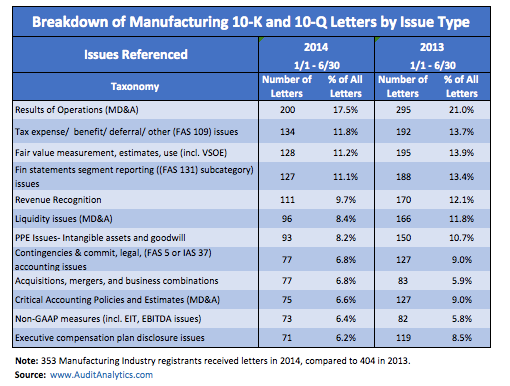 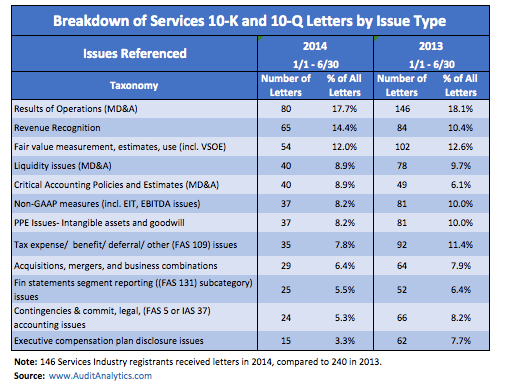 There were 451 letters among 146 registrants for 2014 and 808 letters among 240 registrants for 2013 in the Services industry. This industry saw increases in comment letter activity in both the “Revenue Recognition” and “Critical Accounting Policies and Estimates” categories, from 10.4% and 6.1% in 2013 to 14.4% and 8.9% in 2014. Coincidentally, both Non-GAAP measures and PPE Issues shared the same numbers for both years. 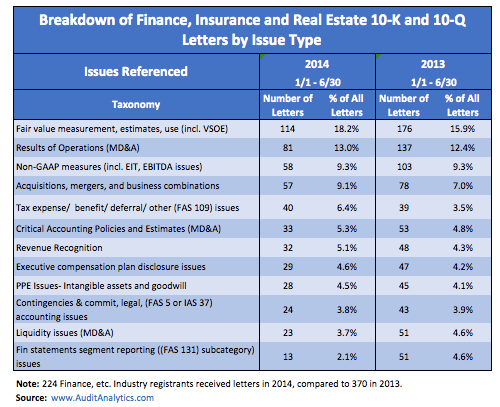 On the other hand, Finance, Insurance & Real Estate companies saw an increase in all but four of these topics, with “Tax expense/benefit/deferral/other” issues almost doubling. The number of registrants that received letters in this industry was 224 and 370, and the total number of letters was 625 and 1,108 for the years 2014 and 2013, respectively. 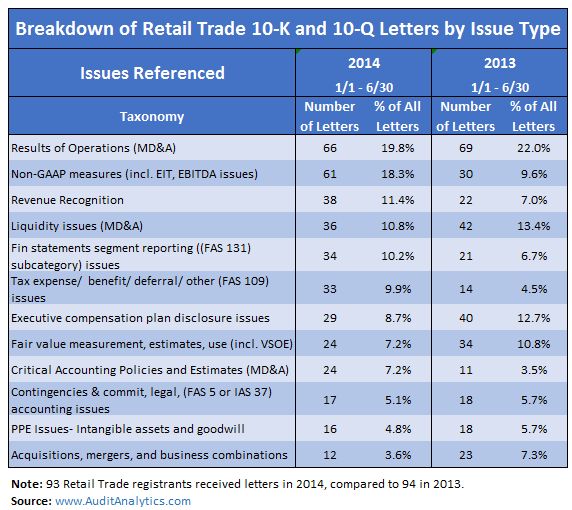 For the Retail Trade sector, Operational Metrics and non-GAAP measurements were especially prominent matters in 2014. The SEC posed questions ranging in topic from the definition of comparable store metrics to the classification of litigation charges as non-recurring in non-GAAP presentations. Revenue recognition questions frequently involved requests to explain estimates related to unredeemed gift cards, and estimates for sales returns and allowances.

Overall, the percentage of letters in the Retail industry that referenced “Non-GAAP measures” almost doubled from 2013 to 2014 (9.6% to 18.3%). The “Tax Expense/benefit/deferral/other” and “Critical Accounting Policies and Estimates” categories also more than doubled: 4.5% to 9.9% and 3.5% to 7.2% in 2013 and 2014 respectively. There were also upticks in “Financial statements segment reporting” and “Revenue recognition” between the years. These percentages were calculated based on 334 letters involving 93 registrants in 2014, and 314 letters involving 94 registrants in 2013.

Consistent with the larger trend, the number of registrants involved in comment letters in all four industries decreased, while the total number of letters also decreased in all but one, with only Retail Trade seeing a minimal increase.

In three out of the four industries, the majority of letters discussed “Results of Operations”. This is one of the most common topics that trigger SEC Comment Letters, with frequent requests for additional information regarding changes in core accounts such as revenue or cost of sales, or requests for additional disclosure when increases or decreases in core accounts appear to be related to an emerging trend in the business or industry. The bulk of letters in the Finance, Insurance & Real Estate industry dealt with Fair Value Measurements, which is logical considering the industry.

Other major topics that we have noticed in our analysis of SEC comment letters include Non-GAAP Measurements, Internal Controls, Use of Operational Metrics, and Subsidiary Guarantor Financial Information.