XBRL was originally created to increase the ease of use of financial information, but the jury is still out as to whether XBRL is a useful tool or a burden. One thing is clear: investors have not fully embraced XBRL, in part because the reliability of XBRL data has not yet been established. The SEC recently announced an initiative to facilitate its use, but concerns about the quality of XBRL filings remain.

According to a recent study from Calcbench, as many as 1 in every 8 companies had at least one error in their XBRL reports. Some are as simple as omitting a negative sign or writing thousand instead of million, but many errors also arise from incorrect or inconsistent use of the normalized XBRL tags.

In many companies, XBRL filings are put together in a separate process from the filing of “normal”, HTML-based financial statements. Further, unlike those quarterly and annual financial statements, the independent auditor is not required to review or audit the XBRL information. As a result there can be something of a disconnect between the two.

Nevertheless, can errors in XBRL statements be indicative of other issues in conventional reporting as well? A few researchers are looking at possible relationships between XBRL and non-XBRL reporting. One recent publication (Hoitash & Hoitash 2014) focuses on a correlation between accounting complexity – as measured by the number of XBRL tags – and financial restatements. According to the paper, companies that use a larger number of tags are significantly more likely to have a financial restatement or a material weakness.

What about timeliness of filings? In one of our previous posts, we noted that NT filings can be a powerful indicator of subsequent accounting problems. In this post, we will look at the timeliness of XBRL filings and its possible relation to a lack of timeliness in a company’s financial filings in general.

Next, we matched the two populations with our Late Filers database. 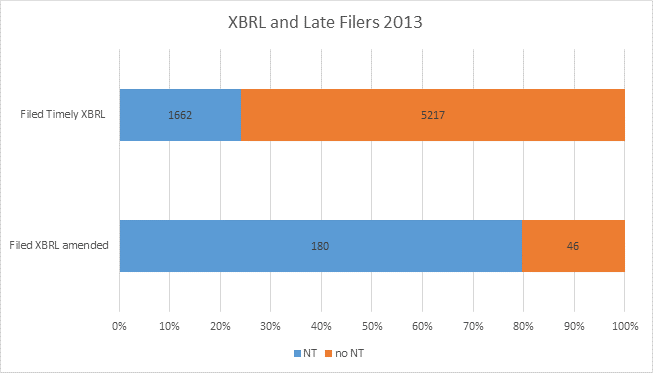 Of note is that most of the companies that filed XBRL in an amended filing were small OTCBB companies. And in most cases, the NT was not directly related to the company’s inability to file XBRL on time. According to an analysis of NT filings during the period of time used above, only 56 companies cited XBRL-related delays. Nevertheless, it seems likely that a lack of timeliness in both XBRL and normal financial statements can be linked to some systemic weaknesses in the financial reporting process in general.

So what’s the takeaway? Missing XBRL filings could be an indicator of process and control weaknesses, which could lead to bigger issues in the future.

Notes
1. For the purposes of this blog, we did not attempt to establish whether the NT filings during the period were filed before or after the amended XBRL filings.
2. The analysis is based on the population of 10-K filers that filed an audit opinion in calendar 2013.