After six years of relatively steady levels of financial restatements, the total number of restatement disclosures dropped by 12.7%.

A Revision Restatement, on the other hand, revises an immaterial misstatement, and are sometimes referred to as “little r” restatements. The distinction is important: a major goal of financial reporting is to avoid material errors, and immaterial errors are considered ongoing adjustments made in a normal course of business. To some observers, “little r” restatements are not really a sign of poor reporting quality. Some even argue that they are a sign of good reporting quality, since they show transparency in disclosure and a dedication to correcting all misstatements, even ones that are immaterial.

Although the dollar value of the largest adjustment in 2015 increased over the prior three years, the $711 million adjustment by Alphabet, Inc. (Google’s parent), is still dramatically lower than the $6.3 billion and $5.2 billion adjustments that occurred in 2004 and 2005. Of note, while $711 million would likely be material for almost every other company, it was just an immaterial Revision Restatement for Alphabet. The revision reduced Alphabet’s previously reported 2014 net income by roughly 2%.

While the decline in the number of restatements is definitely a positive development, the indicators of severity were mixed.

One gauge of the severity of these restatements is found by calculating the impact an average restatement had on the net income of companies traded on one of the three major American stock exchanges. In 2015, the typical restatement had a negative adjustment of about $5.2 million. This is an increase of about 67% and 62% from the 2014 and 2013 metrics. 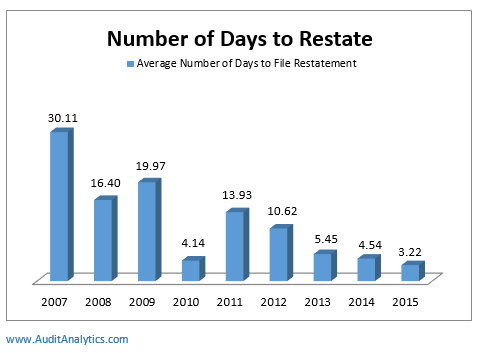 These continuing improvements, as Tammy Whitehouse of Compliance Week noted, are “an incremental improvement in the quality of financial reporting”. One contributing factor may be the recent regulatory focus on internal controls. As our recent analysis indicated, 96% of companies with an auditor’s assessment of their ICFRs have successfully implemented the new 2013 COSO Framework.