Audit Analytics recently released a report looking at going concern opinions over the past sixteen years. 2015 Going Concerns – A Sixteen Year Review, analyzes going concern totals and percentages of total opinions by year, as well as information about new and repeat going concerns and the issues which undermine these assumptions.

While the report indicates a drop in both the number and percentage of going concerns, the specifics of the data indicate that these decreases are in fact due to company attrition within the going concern population rather than an improvement in the population. The graph below shows that of the 773 companies that filed their last going concern in 2014, a total of 650 disappeared while only 123 filed a clean audit opinion in 2015. The 123 subsequently clean audit opinions in 2015 represents the lowest number of “improved” companies during the 15 years under review. 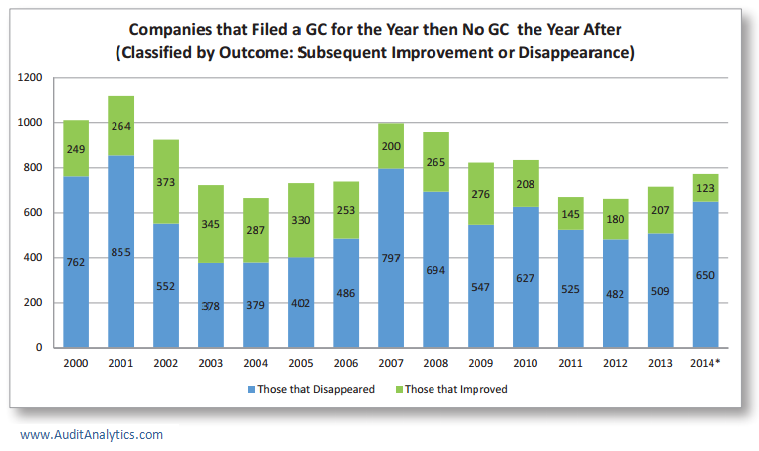 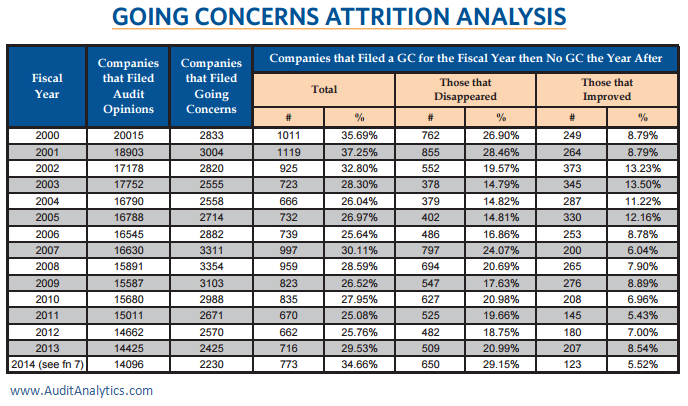 Ranked highest of the issues undermining going concern assumptions was Net/Operating loss (including recurring losses), which showed a 52.31% relative frequency, determined by dividing the total number of audit opinions which mentioned the issue divided by the total number of audit opinions found in the search. Other issues with the highest relative frequency included issues with working capital, negative cash flows from operations and the absence of significant revenues.

The final data is yet to be fully tallied however current estimations indicate that for FY 2015, the number of new going concerns (going concerns filed for a particular fiscal year, but not the year prior) is estimated to be 495, which is the 5th year in a row with an amount under 600. This streak is notable because the 10 years prior to 2011 all had numbers above 600. Moreover, it should be noted that 29.4% of the new going concerns as of August 4th were disclosed in S-1s or F-1s and thus linked to recent IPOs, not established companies. A new going concern linked to a recent IPO should not necessarily be viewed as a negative economic event.

It will be interesting to watch how these numbers trend in the coming years as these new IPO’s either establish themselves or disappear due to an inability to correct their going concern issues.