Are Lengthy Audit Report Lags a Warning Signal?, ask authors Alan I. Blankley, David N. Hurtt, and Jason E. MacGregor in their July 2015 paper in Current Issues in Auditing. In this “practitioner summary” of a research paper published last year in Auditing: A Journal of Practice & Theory, the authors investigated correlations between abnormally long “audit report lags” and the likelihood of a future financial restatement.

As the authors note in their introduction, the accounting literature supports the notion that audit report lag (“ARL”), defined as the number of days between a fiscal year-end and the date of the audit report, is related to the work performed in an audit. In general, a longer audit report lag is thought to imply that more work was performed. In this case, the authors’ theory is in opposition to an intuitive belief that greater audit effort leads to higher audit quality. They argue, rather, that at some point the length of an audit brings diminishing returns and begins to adversely affect the quality of the audit.

To test their hypothesis, Blankley et al. employed a two-stage approach. In the first stage, they calculated the “abnormal” ARL. The abnormal ARL is the residual, or the amount “leftover”, after using a regression model to control for various factors that could have an impact on the timing and efficiency of the audit, including audit complexity, risk, deadlines, relevant auditor characteristics, client capital structure, and the quality of the client’s internal controls. In the second stage, the abnormal portion of the ARL was built into a restatement model, for which the authors used the Audit Analytics Advanced Restatements database. (For more information, please contact us.)

The results seem to support the hypothesis: the regression model suggested a positive correlation between unexpected audit report lags and future restatements. Further, the data concluded that the longer the audit report lag, the more likely the firm was to restate its financial statements.

According to the research, 6.69% of firms in the first sextile, with an average audit report lag of 50.8 days, restated their financial statements. The percentage of restating firms gradually decreases through the third sextile, up to an average ARL of 63.1 days. After that, the percentage picks up again; at 65.7 days the percentage of firms that restated their financial statements grew to 7.39%, and by the last sextile (Avg ARL = 79.9 days) the percentage of restating firms grew to 10.60%. As the others propose, this trend suggests that the initial intuition is correct – i.e., that longer time spent on the audit implies more effort, which leads to better quality – but that abnormal timing can indicate trouble.

The authors introduce three variables that could potentially explain the observed positive correlation between audit lag and restatements: economic bonding, lack of auditor expertise, and time pressure. Blankley, et al. argue that economic bonding and lack of auditor expertise are note likely the root cause, since they were unable to find evidence in support of those hypotheses. Furthermore, the authors speculate that clients with difficult issues are more likely to select more experienced auditors. Audit lag in these cases, consequently, would not be caused by any lack of expertise on the part of the auditor.

One of the explanations that the authors do find evidence to support is time pressure. Left with time pressure as the remaining explanation, the authors hypothesized that time pressure was the root cause of the increased likelihood of future restatements. To test this hypothesis, the authors performed two tests. First, they compared a given client’s previous financial statement to a variable representing the unexpected time difference associated with the current and last year’s audit. For their second test they included a variable representing whether the firm completed its SEC filing within the five days leading up to its statutory filing deadline. With both tests they found a positive correlation between audit report lag and future restatements, implying that time pressure may reduce the quality of audits experiencing abnormally long audit reports.

In the table below, we present a histogram of when the fiscal 2014 10-Ks for Large Accelerated Filers with 12/31 year ends were filed. These firms have 60 days to file their 10-K with the SEC. (Orange represents filings issued after the deadline.) 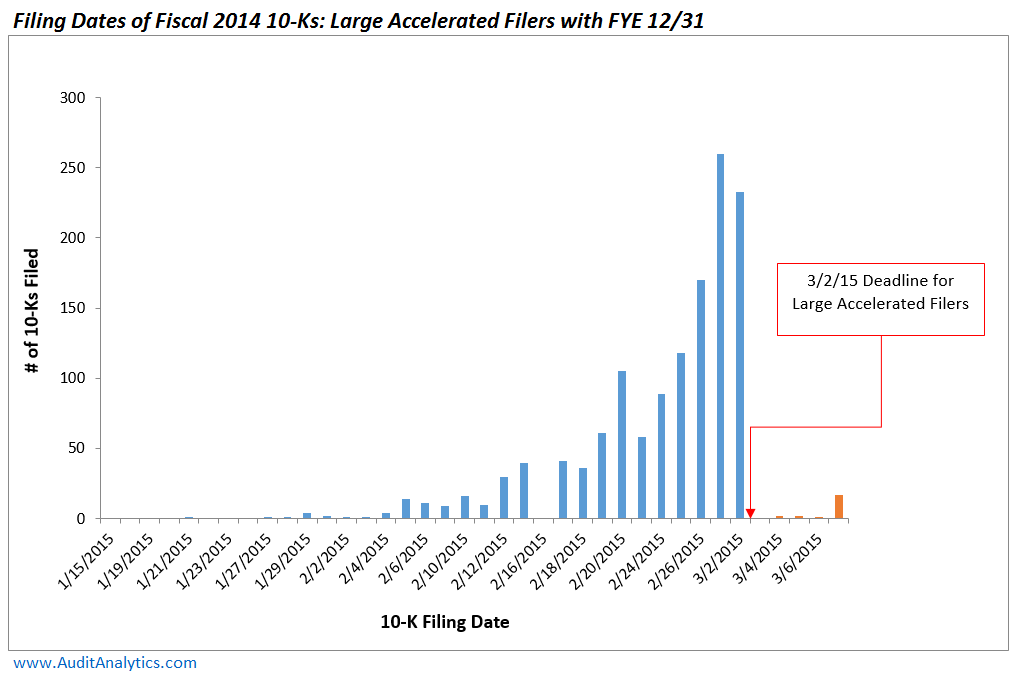 While many firms do file their 10-Ks with plenty of time to spare, the majority – as one might expect – file much closer to the deadline. According to these figures, 65% of these 12/31 Large Accelerated Filers issued their 10-Ks in the 5-day window leading up to the 60-day deadline.

There is not enough information in this chart, however, to speak to abnormal audit report lags, since we have not controlled for the various factors the authors include in their model. Nevertheless, the chart raises some interesting questions. One company filed on January 21, just three weeks after their fiscal year end. A curious person might wonder how the company was able to close its books and have them audited in such a short amount of time. On the other hand, 233 companies filed right on the due date. One might question whether the work was truly completed or if things were just wrapped up in order to file on time.

Interestingly, whether or not the filings are late relative to the regulatory filing deadline is not specifically addressed in the research. In the paper, the authors do not specifically investigate late filings, but instead use the abnormal residual to test the connection to restatements. Referring to Figure 1 above, depending on the size of the companies included in the sextiles, some of them are surely late. (Large Accelerated Filers have 60 days for annual reports, Accelerated Filers have 75 days, and Non-Accelerated have 90 days.)

Blankley, et al. conclude that there is a positive correlation between audit report lags and future financial restatements, suggesting that abnormally long audits may not be an indicator of better quality audits, but in fact might be a warning signal. They further postulate that the pressures of deadlines and a lack of time may be the cause of this correlation.