Small Audit Firm Membership in Associations, Networks, and Alliances: Implications for Audit Quality and Audit Fees, an academic paper written by Kenneth L. Bills, Lauren M. Cunningham, and Linda A. Myers, examines membership in networks and alliances. The authors find evidence that smaller audit firms benefit from joining such an association. The gist of the argument is that, while a smaller accounting firm on its own may not be able to compete with the larger firms, joining an association will help provide networking, resources, and a stronger reputation. These enable member firms not only to edge out the competition of other smaller firms, but also to win the engagements of larger clients that they may not be able to adequately audit otherwise.

Their methodology involved looking at misstatements, discretionary accruals, and audit fees. After comparing similarly-sized firms, they found that those belonging to an association were 48% less likely than nonmembers to receive GAAP-related PCAOB inspection deficiencies, and 42% less likely to receive GAAS-related deficiencies. Further, association members were 46% less likely to have financial restatements among their clients. The authors also provide evidence that clients of association firms pay roughly 26% higher audit fees than the clients of nonmember auditors.

Overall, the paper argues, association members provided a higher audit quality than nonmembers. The evidence suggests that the benefits of joining an associations enables smaller firms to audit large public companies. Nevertheless, the size of clients served by association member firms is still relatively small – only one company in the S&P 500 uses an audit firm outside the Big Four – so generalizing their results towards all large clients would likely prove fruitless.

In the remainder of this post, we look at the market share breakdown of a handful of associations, namely Baker Tilly, PKF, Moore Stephens, PrimeGlobal, and the Leading Edge Alliance. (In each case, we limited the analysis to only the North American association members.) These five include the most member firms doing public company audit work, aside from the BDO Alliance, which we excluded in order to treat BDO USA separately.1 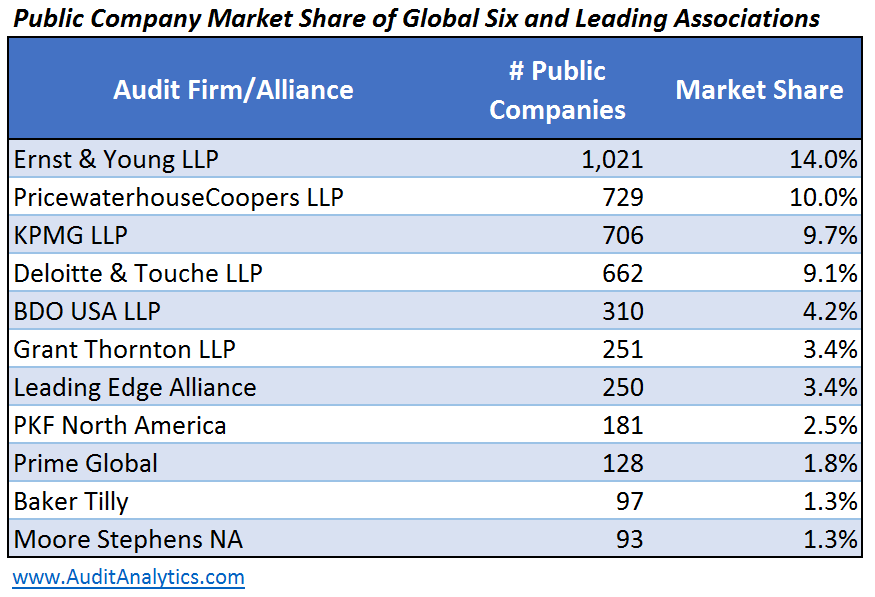 As one can see from the table above, the Big Four firms dominate the market share for public company audits. The Leading Edge Alliance roughly equals the presence of Grant Thornton, with PKF not too far behind. Taken as a whole, the remaining associations of PrimeGlobal, Baker Tilly, and Moore Stephens are about the size of BDO in terms of market share.

Benefit Plans
The market for ERISA Benefit Plan engagements reveals a much different landscape. While the associations fell quite short of the Big Four in terms of auditing public companies, the opposite is true for ERISA benefit plan audits. 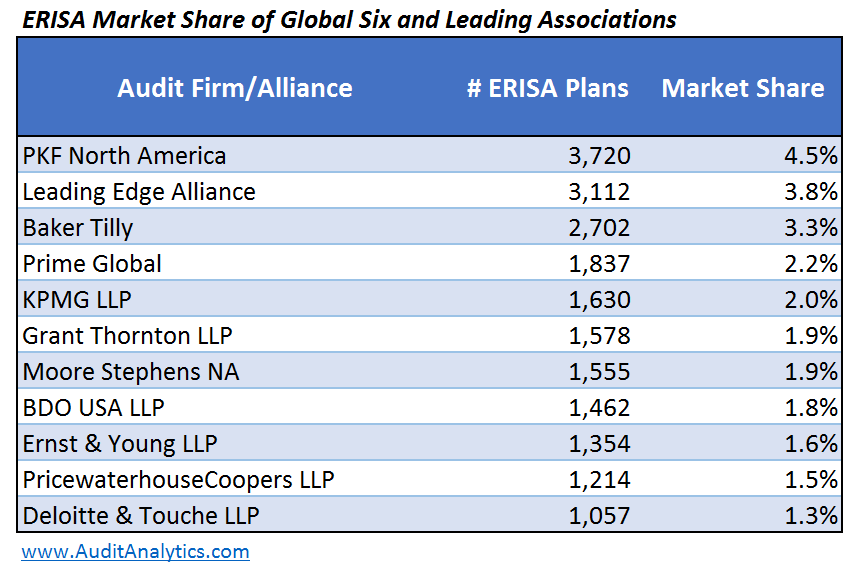 Not only do associations compete with the Big Four in this market, they in fact surpass them. PKF North America leads the way with 3,720 audits. Interestingly, the top four in ERISA market share are firm associations. 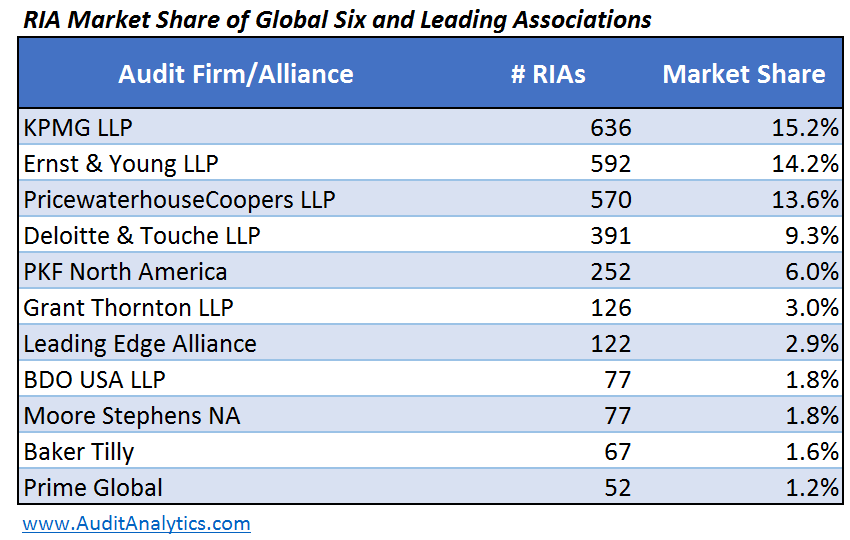 As shown in the table above, the Big Four represent the largest percentage of market share among RIAs. PKF North America is not far behind, though, and the Leading Edge Alliance also fares well.

Based on this research, it appears that our data supports the basic point of the paper. Accounting firm associations can compete with larger audit firms.

1. Auditor tallies for RIA and ERISA engagements are based on the most recent filing for each plan and adviser in the past 48 months. The data in this analysis is as of August 2015 .↩