Of the Big Four and major National accounting firms, BDO USA had the best quarter in terms of new SEC client wins. Thanks largely to its acquisition of the Texas practice of UHY, BDO gained 20 new clients and had a net increase of 18 over the last three months of 2014. This caps off what looks to be another year of growth for BDO, with a net gain of 37 clients for the year following a net increase of 57 in 2013.

As with last quarter, the table below presents a comprehensive view of the gains and losses of the major global and national firms. It shows how many SEC audit clients each auditor gained or lost, and also the auditor from or to which the client was either won or lost. 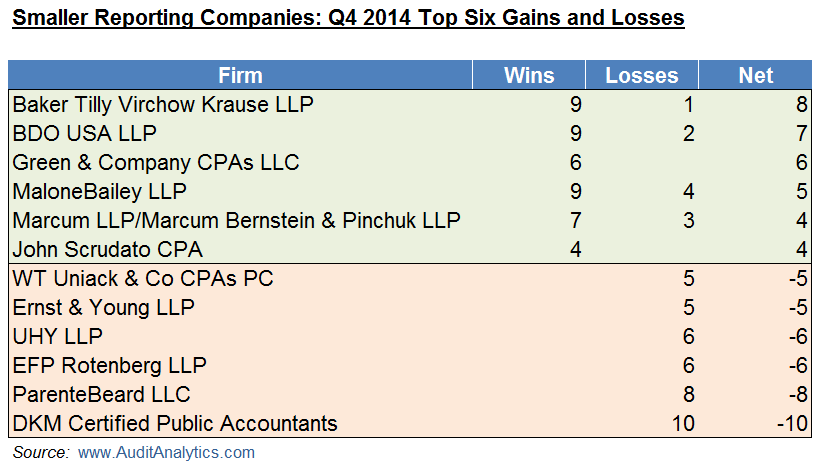 Among the smaller firms, DKM Certified Public Accountants lost 10 Smaller Reporting Companies in Q4. You sometimes see interesting things with local and small regional accounting firms, and here we have one of those cases. The Clearwater, FL based firm “declined to stand for appointment” as auditor for six of its clients, and all six of those companies subsequently hired Greene & Company to perform their audits. It is unclear what the connection might be between these two audit firms and the companies that switched. DKM’s most recent PCAOB inspection report raised concerns about whether the “audit partner’s workload requirements realistically allow for sufficient time to perform procedures, supervise staff, and review work papers with due care.” Questions about the auditor firm’s procedures were also raised by one of its clients.

Three companies – AF Ocean Investment Management, ChinAmerican Andy Movie Entertainment Media, and Sichuan Leaders Petrochemical – each dismissed DKM in October, only to rehire the auditor in January of the new year. Each of these companies share the same executive team, namely Andy Z. Fan (CEO) and Tina M. Donnelly (Corp. Secretary), both of whom were at these companies during the whole time they were switching from DKM to Cutler & Co. and then back to DKM.