When a company changes its auditor, it’s usually an important event. Even when it happens for routine reasons, a change in auditor presents many issues and challenges. How will the new audit team integrate? Will they turn up anything that the previous auditor missed? And auditor changes don’t happen too frequently, at least with big established companies. Only seven S&P 500 companies (1.4%) changed auditor last year.

Whatever the case may be, a change in auditor is material information to a company’s stakeholders. For that reason, companies are required to file an 8-K Current Report with the SEC to announce the change. And, while most are relatively routine or uneventful, every so often one occurs in the midst of much more dramatic circumstances.

Advanced Emissions Solutions, Inc. (ADES) filed an 8-K yesterday stating that its independent accounting firm was resigning, and the discussion of the events surrounding the resignation is remarkable.

• inadequate management oversight and monitoring of the Company’s internal controls over financial reporting,

• inadequate accounting resources, as the Company does not have a sufficient number of accounting personnel with appropriate technical accounting or financial reporting experience, and

• additional material weaknesses related to the Company’s restatement adjustments not finalized at the time of KPMG’s resignation.

In addition, upon resignation, KPMG informed Company management and the Audit Committee that information related to the following matters came to its attention which, if investigated further, may (a) materially impact the fairness or reliability of the financial statements as of and for the years ended December 31, 2013, 2012 and 2011 and the interim periods therein, (b) have caused KPMG to be unwilling to be associated with the Company’s financial statements, or (c) have prevented KPMG from rendering an unqualified opinion on the financial statements referred to above, and due to its resignation, KPMG did not conduct such further investigation.

In addition, KPMG expressed to management and the Audit Committee its concern that there is an inappropriate tone at the top, discontent with the Company’s timeliness and responsiveness to its requests for information and inability to determine whether management has made available all financial records and related data. In giving the Company its resignation notice, KPMG referenced the issues noted above and its inability to rely on management’s representations.

ADES, in their words, “does not believe that it can make the required financial filings and regain compliance with the rules of The NASDAQ Stock Market by March 27, 2015 and expects to have its common stock delisted from the NASDAQ Capital Market.”

It seems their lack of confidence was shared with the market. After closing last night at $19.81, ADES is down about 45% and is currently trading at around $11. 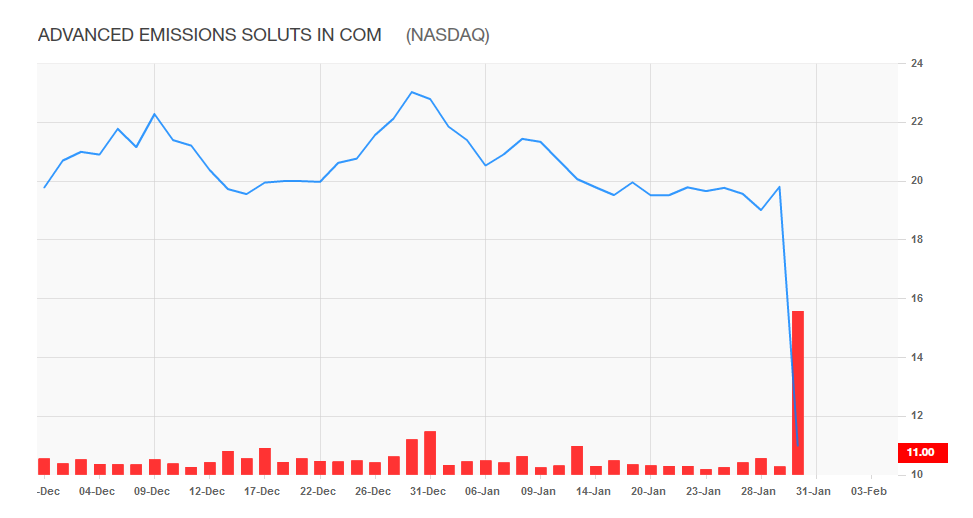 While this may be a rather extreme example of how a change in auditor may illuminate deeper company issues, it stands to reason that if an auditor is re-considering its relationship with a company, so should its investors.