The Big Four get a lot, if not most, of the attention in the auditing industry. But there are many other firms that, while they may not have nearly the same footprint as the global firms, nevertheless play a major (perhaps underappreciated) role in the marketplace.

In this post, we wanted to touch on the hundreds of local and regional firms that tend to provide services to other entities besides large public companies. To do so, we picked a couple of counties – Cass County, ND and King County, WA – and, utilizing our Market Intelligence App, focused on a specific portion of the audit market.

First, let’s take a look at Cass County, North Dakota, the county in which Fargo is located. Using the app, we selected Cass County as well as the seven other counties that border it. The search results are presented in the image below (click to expand):

As one can see, there are only a few SEC registrants in the greater Fargo area, and much of the audit market consists of smaller engagements like ERISA Benefit Plans (Form 5500) and Non-Profit Institutions (OMB A-133).

So who are the major players in this market? Let’s look at Non-Profits. The audit market for Non-Profits revolves around the Single Audit, as described in OMB Circular A-133, which covers audits related to the receipt of federal funding. 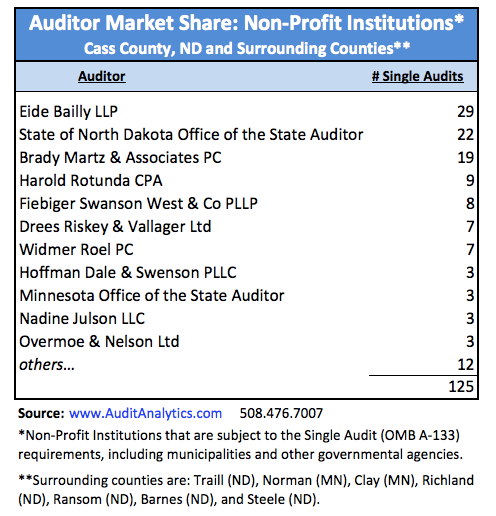 It may not be surprising that Eide Bailly comes out on top, with 23% of the market. The regional firm is headquartered in Fargo, and clearly has a strong presence in that area.

Excluding the State Auditor, the only other firm with more than 10% of the market is Brady Martz & Associates, with 19 Non-Profit audits in the counties listed. That firm is headquartered just a few miles north of Fargo in Grand Forks, ND.

Now let’s turn to King County, WA. Home of Seattle, King County is the most populous county in the Pacific Northwest, and it has a much larger audit market than Cass County, ND. Still, with just over 100 SEC registrants, the bulk of its market also consists in other independent audits.

To focus on one particular area, we looked at the auditor market share of ERISA Benefit Plans. (Generally, employee benefit plans with 100 or more participants are required to obtain an audit in conjunction with the filing requirements of IRS Form 5500.) 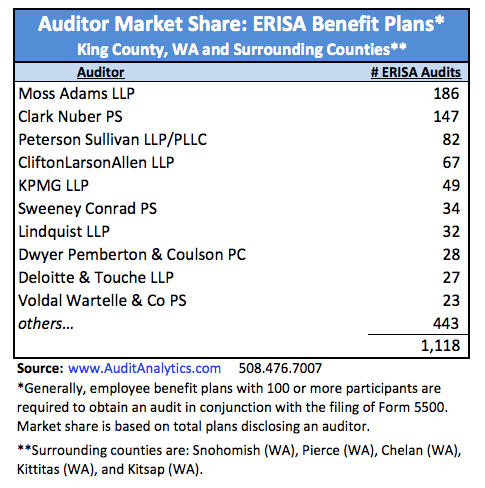 As one can see in the table above, there are over 1,100 ERISA benefit plans that obtain an audit in Seattle and its surrounding counties, and two audit firms lead the pack: Moss Adams, with about 17% market share, and Clark Nuber, with about 13%. Peterson Sullivan is third with about 7%, while CliftonLarsonAllen and KPMG round out the top five.

Interestingly, The top three firms in this market niche are all headquartered in King County. CliftonLarsonAllen has its home in Minneapolis, and KPMG, of course, has major offices all around the globe.

The Big Four may dominate the SEC Public Company sphere, with over 80% market share between them, but that represents only a slice of the larger audit market throughout the country. There are hundreds of thousands of ERISA Benefit Plans, tens of thousands of Non-Profits, Hedge Funds, and other filers, and literally millions of private companies, all of which can use audit firms for one thing or another.