In this annual blog, we aim to discuss macro trends in SEC Comment Letters issued between 2010 and 2016. We typically focus on comments related to annual and quarterly filings of 10-K filers. This year, however, we provide some insight into the prominence of 8-K reviews.

As we can see from the chart below, the major trend in 10-K and 10-Q letters remained intact. The number of SEC Comment Letters declined by roughly 66% since 2010, and by about 14% from 2015.The chart below presents the total number of comment letters by the year of origination, for the 10-K and 10-Q filings and, as a separate series, for the 8-K filings. 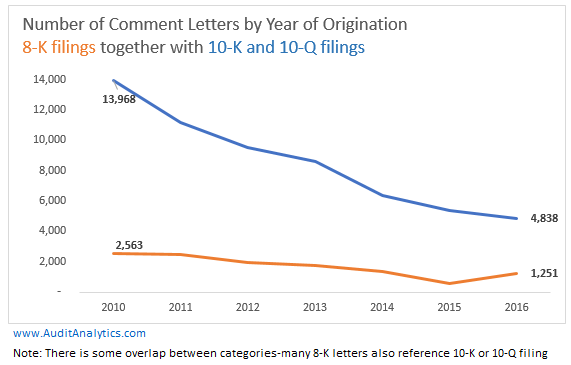 The 2016 count of 1,251 8-K SEC Comment Letters was more than twice that of the 2015 (in 2015, we identified only 589 letters). The change of trend, while interesting, was anticipated. In the second half of 2016, after forceful speeches and numerous warnings, the SEC initiated a massive Regulation G compliance campaign with focus on undue prominence of non-GAAP presentation in earnings releases which are frequently furnished as SEC exhibits to 8-K filings. (Our analysis of SEC non-GAAP comments was discussed here)

Of note is that while many companies adjusted their non-GAAP presentation in response to SEC comments, as of May 2017, we were still seeing numerous non-GAAP comment letters.