In this post, we take a look at the audit fees of Canadian public companies. How do audit fees compare from one industry to the next in Canada? How do the audit fees of those industries compare to their United States counterparts? Based on an analysis of 2012 SEDAR filings, we noted some interesting differences and parallels.

As one might expect, different industries tend to have different benchmarks for their audit fees. Regulation, complexity, and other factors differ from one industry to the next, and that is reflected in the audit fees of the companies in those industries. We have previously observed this phenomenon in US companies. Whether audit fees are measured as a percentage of assets or revenues, they can vary greatly between industries.

The graph below shows the average audit fees in different industries for companies that only file with the Canadian securities regulatory authorities.1 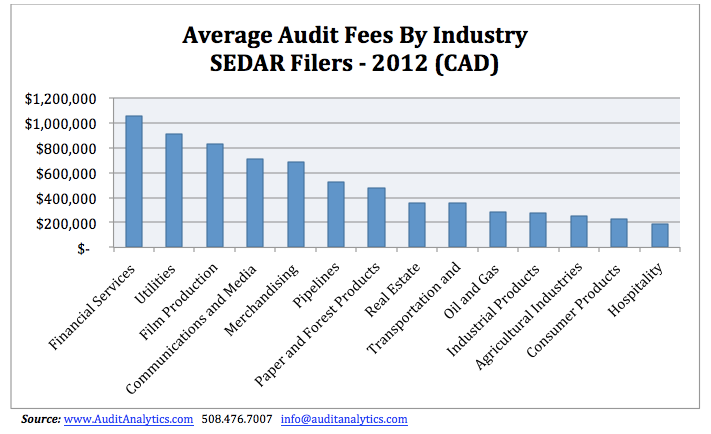 As one can see, companies in the Financial Services industry tend to have higher audit fees than many other industries, and Consumer Products is toward the low end of the spectrum.

Interestingly, this seems to mirror what we found in our post on US filers from January. In that post, we noted that average fees for the Finance and Insurance, when measured as a percentage of revenue, were 0.08%, much higher than other industries. On the other hand, Retail companies had by average audit fees as a percentage of revenue at less than 0.02%, by far the lowest.

Considering that US and Canadian companies face a lot of the same challenges, we might guess that their audits would reflect similar relationships. The table below examines how audit fees as a percentage of revenue for some of Canada’s largest banks measures up to the US average.

Somewhat surprisingly, this population of banks shows a significantly greater average percentage of fees/revenue than the US average. This is a small sample size, however, and the overall average of 0.14% appears to be skewed by three companies, Laurentian Bank of Canada (0.32%), AGF Management Limited (0.25%), and Canaccord Financial (0.40%). Without those three companies, the average fees to revenue ratio drops to about 7%, much more similar to the US companies.

1. A number of companies file both with the Canadian Securities Administrators (CSA) and the SEC. Since we wanted to focus on Canadian-specific companies, we eliminated these “dual-filers” from our analysis.↩