Companies, like we individual taxpayers, have to file their annual and quarterly reports within a given time frame. What happens when a company won’t be able to meet the filing deadline? Just as an individual can easily obtain an extension for their tax return, companies can file a Non-Timely notification, which basically extends the filing deadline.

For investors, however, a company failing to meet its reporting deadlines should probably raise some red flags, especially if the explanation for the delay is unconvincing or worrying.

In this post, we’ll provide an overview of recent trends in NT 10-Q filings for accelerated and large-accelerated filers. The focus of this post will be on the timing of these NT filings. When in the filing period do companies notify the public that they won’t meet the deadline? And how long does it typically take for a company to file the actual 10-Q?

The SEC requires domestic publicly-traded companies to file both annual (Form 10-K) and quarterly (Form 10-Q) financial reports. The annual report is the more detailed of the two reports, providing an extensive overview of the company’s business practices and finances for the year in question. The quarterly report provides a less detailed snapshot of a company’s finances for an interim period within the fiscal year.

The filing requirements for the 10-K and the 10-Q include a deadline, which is determined by the filing status of the company: accelerated, large-accelerated, and non-accelerated filers. This filing status is based on a company’s public float, which is essentially the number of shares held by public investors multiplied by the share price. The following table from the SEC website displays the deadlines for each type of filer:

When a company cannot file a 10-K or 10-Q within the given timeframe, SEC rule 12b-25 requires that the company must use an NT, non-timely, filing. An NT filing is a notice sent from the company stating that the deadline has not been met due to a given reason and that the actual filing will be filed within a specified range of time. An NT 10-Q filing provides an additional five days for the actual 10-Q to be filed. An NT 10-K provides an additional 15 days for actual 10-K to be filed. If these additional deadlines are met, the company is not penalized and the filing is considered timely.

If the deadline is missed, however, consequences may include loss of SEC registration, de-listing from stock exchanges as well as possible legal consequences. And there are other consequences to non-timely filings as well, that an investor or other stakeholder might want to take note of.

Recent research supports the idea that NT 10-Qs have a negative effect on share value, as one might expect. A paper by Bartov, Defond and Konchitchki, for example, presented evidence that late filings are correlated with negative market reactions. Interestingly, the negative share price reaction tended to be more dramatic for NT 10-Q filings, particularly when the reason for the delay was related to accounting issues.

One reason that late quarterly reports may be more significant is that they contain less information than a 10-K and aren’t audited, and therefore should be easier to file. The relative simplicity of the filing leads to questions about the reporting company if they are not able to meet these fairly minimal requirements. Are the company’s controls effective? Are there accounting issues? Are the personnel inadequate? These are just some of the questions an investor might have.

The following chart presents a frequency distribution analysis of the NT 10-Qs filed by accelerated filers, listed on a major exchange, filed between 2011 and 2013. 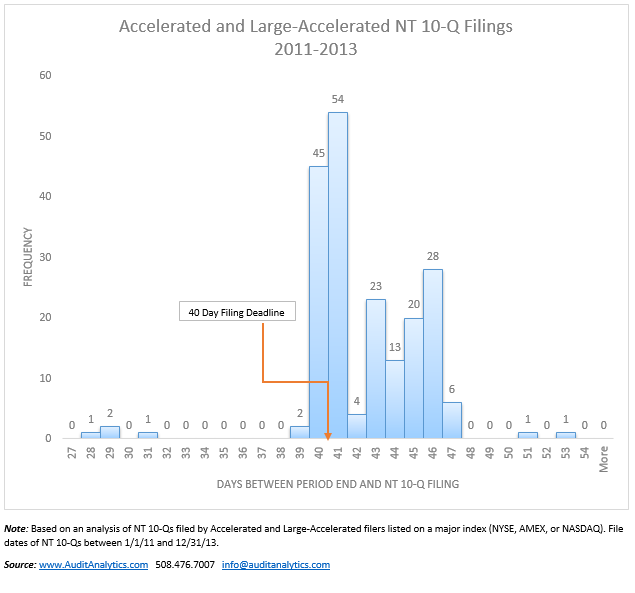 Based on the chart above, a slight majority of companies (105 out of 201, or 52%) filed NT 10Q between 39 and 42 days after the fiscal period end.1 As with tax returns, this result is logical and expected – if you were a CFO, wouldn’t you wait until the last day before admitting that you cannot file your financials on time?

But a significant number of companies (42%) filed late NT filings. While Bartov, Defond and Konchitchki claim that some reasons for NTs are more meaningful than others, exceptions from late filing patterns can also be used as a source of important information. Filing a non-timely Non-Timely filing notification, for example, probably indicates internal control and financial reporting problems. Further, 4 unusually early filings (filed between days 28 and 31) were all filed by Herbalife (HLF), which was forced to file an NT 10Q for unusual reasons. Their 10-Q was complete and ready to go, but they didn’t have an auditor to review them. Herbalife’s previous auditor had recently resigned due to independence issues, so the company was unable to provide reviewed financial statements as required. In its NT 10-Q for the period end 3/31/2013, filed on 4/29/13 (day 29), the company wrote:

Also, as a result of KPMG’s resignation, the unaudited interim financial information presented in the First Quarter 10-Q has not been reviewed by an outside independent accounting firm as required by the rules of the SEC. As a result, the First Quarter 10-Q is considered deficient and the Company is no longer considered to be timely or current in its filings under the Securities Exchange Act of 1934, as amended (the “Exchange Act”). 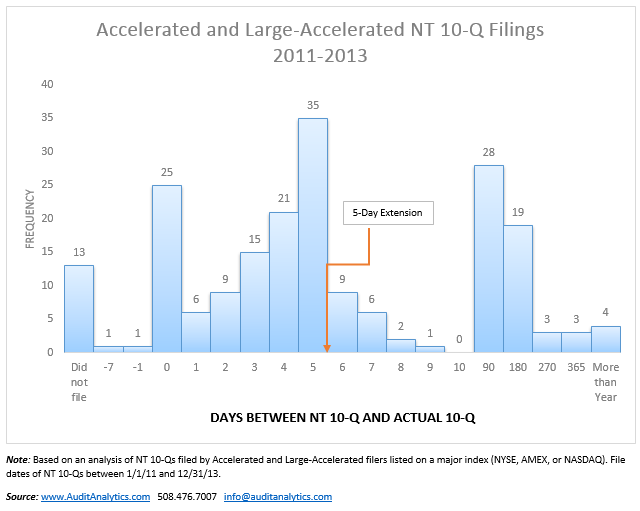 As described in the chart above, 64% of the late filers were able to complete the work and release financials within two weeks after the late filing. 129 actual 10-Qs were filed 0 to 9 days after the initial NT 10-Q.2 It is probably safe to assume that for those companies, the issue that triggered an NT was not very substantial (such as, for example, an inability to complete the XBRL filing) and did not require lengthy internal investigations or involvement of outside advisers.

To summarize, common sense suggests that any NT is bad news for the company, and a red flag for investors and regulators alike. A little digging into the data suggests that NT filings that are either filed outside of the 40-41 days window or are not followed with a prompt completion of financial reports raises more significant red flags.

In the next post on this topic, we will look into NTs that cited accounting issues as the reason for delay. These, according to the accounting literature, are especially significant to investors and regulators.

1. If the 40th day falls on a weekend, then the deadline is pushed to the next business day. By including days 39, 41, and 42, we’re conservatively allowing for the possibility that the 40th day for some of these companies was a Saturday or Sunday.↩
2. Note that there are two 10-Q filings that appear to be filed before the related NT 10-Q (“-7” and “-1” in the second chart). The NT 10-Q apparently filed 7 after the actual 10-Q is actually an amended form NT 10-Q/A. The actual 10-Q for this company was actually filed 6 days after the original NT 10-Q. In the other example, the NT 10-Q was indeed filed 1 day after the actual 10-Q. In that case, the 10-Q was filed without the required XBRL financial statements, which were subsequently provided in a 10-Q/A.↩