Over the past 10 years, major drivers behind securities litigation were either financial restatements and misrepresentations or significant corporate events (such as IPOs and M&A activity).

Material restatements are very likely to trigger a legal action. Yet, the key question that is often asked is – how do we identify cases where litigation risk is elevated before the legal action is filed? In many cases, there are early indicators that could be identified using Audit Analytics’ databases. 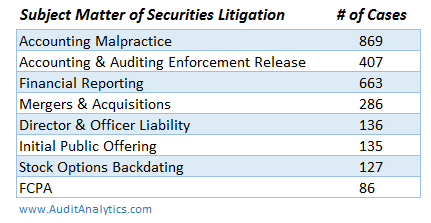 Indicators such as late filings and directors and officers changes are available as daily email alerts – meaning that our clients get notified every time this flag is noted.

For example, over the last year and a half AECOM has had internal controls, out of period adjustment, disclosure controls, and Beneish M-Score flags. In September 2016, a securities class action was filed against AECOM in William Graves v. AECOM et al.

The complaint alleges that Defendants made materially false and misleading statements regarding AECOM’s business, operational and compliance policies. Specifically, Defendants made false and/or misleading statements and/or failed to disclose that: (i) AECOM engaged in fraudulent and deceptive business practices (ii) AECOM lacked effective internal controls over financial reporting; (iii) AECOM overstated the benefits of the URS Acquisition; (iv) AECOM overstated the Company’s free cash flow (“FCF”) per share; and (v) as a result of the foregoing, AECOM’s public statements were materially false and misleading at all relevant times.

Companies are measured on timeliness in filing of their financial statements. As with the previous indicator, a late filing for a bigger company that usually files on time may be a sign of trouble, especially if accounting issues are cited as a cause of delay. For example, Hain Celestial Group announced on 8/15/16 that it would delay the release of its 4th quarter and FY 2016 financial results. The reason? The company was investigating certain revenue arrangements with distributors. The company stock fell 26% the next day. Between August 16th and November 16th the stock had lost another 10%. On November 17th the company announced that the audit committee completed its review and did not find any evidence of an intentional wrongdoing. Since then the stock came back to its August 16th levels, which is still well below its peak value.

There is an indication that SEC division of enforcement is paying close attention to ICFR deficiencies. Historically the SEC looked at ICFR issues mostly in a context of more clear-cut violations like fraud, nowadays they give ICFR extra scrutiny on its own merits. Other consequences may include a negative market reaction (Zhang and Pany 2008) and a higher cost of capital (Schneider and Church 2008).

Usually, a company switches auditors for fairly mundane reasons: a fee can’t be agreed upon, a relationship develops with another firm, etc. However, any time a new auditor comes in, there is the risk of at least two significant negative outcomes: first, the new auditors may uncover an issue that leads to a restatement; second, the new auditors, due to lack of familiarity with the client, may fail to give proper attention to key risks, which could allow mistakes to go uncorrected, leading to material problems in the future.

More severe risk. In certain rare instances, the auditor and client part ways due to a dispute, typically regarding an accounting matter. In these cases, the auditor is obliged to report the issues constituting the disagreement.

Another Critical risk indicator would be if a company were to change its auditors more than once in a two-year span. To us, this could only signify that a company was trying – and failing – to unduly influence the auditor’s opinion, or that the departing auditors were unwilling to express an unqualified opinion on the company’s financial statements. The multiple auditor switches in a relatively brief time period is a definite risk indicator.

Unexpected departure of a C-level executive or a member of a Board of Directors may be a sign of a significant problem in the company. The issues may be severe if the departure is accompanied by the “tone at the top” language. This may indicate an improper management conduct, and potentially an increased risk of an SEC investigation. For example, Valeant Pharmaceuticals “tone at top” was cited in the ICFR opinion. In March 2016, the CFO of Valeant resigned, and in October 2016, the former CEO and CFO became a focus of a criminal probe.

If you would like to learn more about our market intelligence solutions for the audit and legal industries, please contact us to schedule a demo or to request more information.