Oil price predictions for the end of 2016 are on the optimistic side, with many putting price per barrel estimates towards the upper $40’s. Although these predictions suggest a slightly bullish oil market for the upcoming months, these price points are still relatively low for the profitability of oil companies.

Morgan Stanley Research puts break-even prices per barrel (bbl) in the low-to-mid $40’s for many methods of production such as deepwater, row onshore, extra heavy oil, ultra deepwater, and oil sands. Oil has been priced below or around those levels for much of the past twelve months. Further, Morgan Stanley estimates the break-even price for North American shale production to be around $54/bbl, a price not seen since the beginning of July 2015.

The long down-turn in oil prices has obviously affected the market. Companies like Exxon and Chevron are under-performing their non-oil peers in the S&P 500 and posting some of their weakest profit numbers in more than fifteen years. With this in mind, and knowing that the price of oil affects a wide range of companies in the industry, we were curious to see what effects, if any, such a prolonged depression in the price of oil is having on SEC disclosures.

One of the most obvious, dire circumstances for a failing company is bankruptcy. If we examine the bankruptcy filings of SEC Registrants with NAICS Codes 211 and 213 (Oil and Gas Extraction, and Support Activities for Mining) we notice some interesting activity in the years immediately following a sharp fall in oil prices. 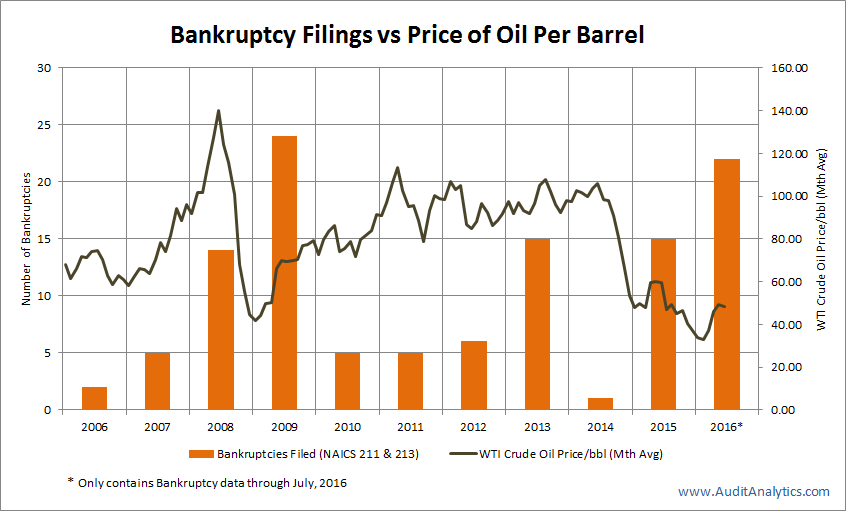 With the reasonable exception of 2008, when the global economy crashed, the chart above shows some of the highest counts of bankruptcy filings reported in the years following a steep decline in oil prices. In recent years, the number of bankruptcies is as high as during the “Great Recession”. Consider further that we’re only seven months into 2016 and 22 bankruptcies have already been filed. It seems reasonable to assume there may be more through the end of the year.

Also note that bankruptcy filings may not provide a comprehensive picture of the downturn in the oil and gas industry. Large players, such as Peabody Energy back in April 2016, may formally file for Chapter 11 protection, but smaller companies often simply “go dark” and disappear.

An article by Deloitte suggests that the collapse of oil prices will have a number of impacts on companies’ financial statements, including increased risk of asset impairments, cash flow/profitability concerns, and debt restructuring issues. Given these suggestions and knowing liquidity concerns are a common cause of going concern opinions for oil and gas companies, we can take a look at going concern modifications in audit opinions within the oil and gas industry and see if any trends have developed over the last ten years. 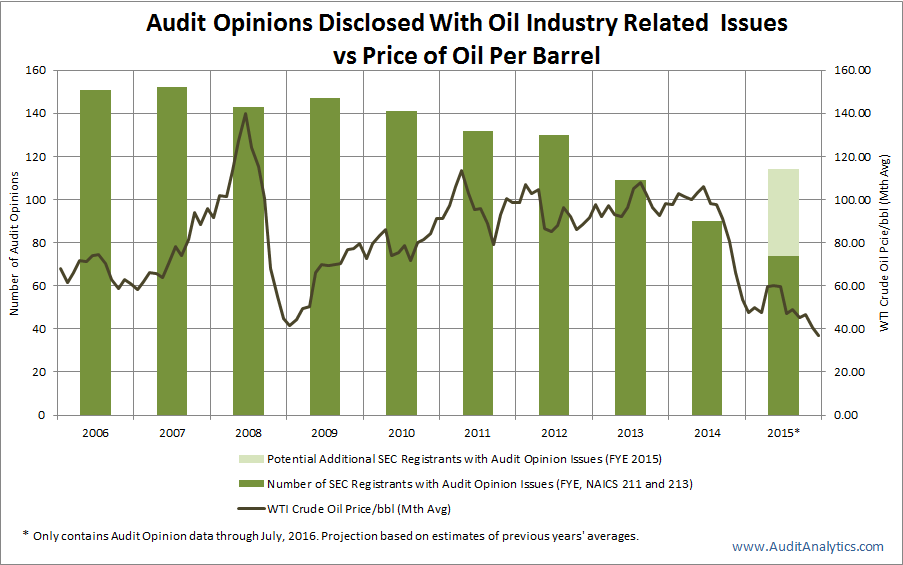 Examining the data from year to year, there actually does not seem to be a strong correlation between oil price decline and the number of going concern warnings issued by auditors. At a high level though, these issues have seemed to decline from the highs of the late 2000’s, over which time the price of oil was either increasing or was relatively stable. As for the fiscal year end 2015 data, we estimate only roughly 65% of the audit opinions for this year are available. Taking this into account, it’s possible another 40 companies will disclose audit opinions with adverse oil price related issues which would result in quite a substantial increase from 2014.

In compiling this research and checking through many of the filings represented in the charts above, we noticed several common themes including companies selling off oil land rights and scaling back capital expenditures and exploration opportunities. Houston based drilling services provider Hercules Offshore, Inc. mentioned the impacts of some of these issues in their 3/30/16 10-K, stating “the fall in the price of crude oil, coupled with the consolidation of the domestic customer base, have negatively impacted demand for jackup rigs in the U.S. Gulf of Mexico. Jackup rig demand in the region, as defined by rigs under contract, has fallen from 31 rigs on July 21, 2014 to 6 rigs as of March 23, 2016.” That’s a drop of almost 81% in rigs under contract in less than 2 years.

We hear time and time again of the United States’ eagerness to depend less on foreign oil, through either developing substitutes or cutting imports and increasing domestic production. However, with OPEC predicting global demand for oil to grow in every sector other than electricity generation though 2040, and with no sign of the supply glut ending, we wonder how these prolonged periods of depressed oil prices will affect the infrastructure for the generally more expensive North American oil producers.