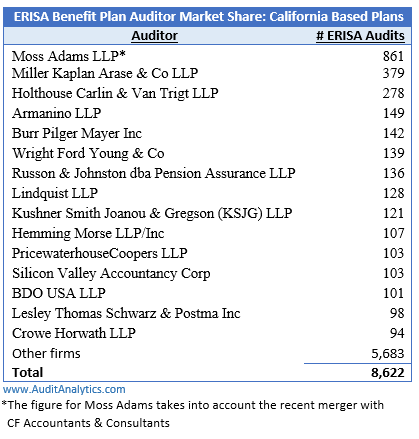 There were a total of 8,622 ERISA plans audited in California. Moss Adams audited 861 benefit plans, more than twice the number of the next highest firm, Miller Kaplan Arase & Co. Moss Adams has over 10 office locations in California, including in Los Angeles, San Diego, and San Francisco. 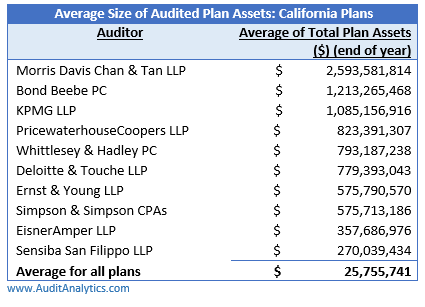 Each of the Big 4 firms made the top 10 for California. While they may not audit the most number of plans for this area, they do play a significant role in auditing the larger ERISA benefit plans. 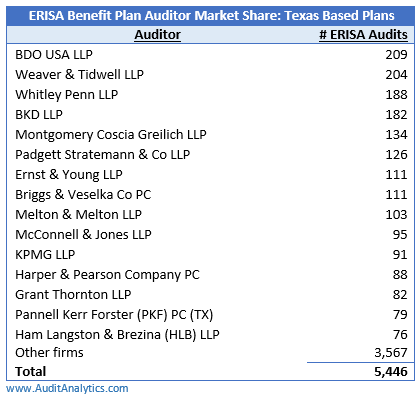 There were a total of 5,446 ERISA plans audited in Texas. The two leading audit firms were BDO USA and Weaver & Tidwell, auditing 209 and 204 benefit plans. Unlike California, we do not see such a large gap between the top Texas firm and the rest. 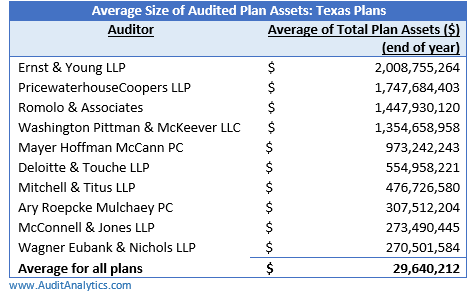 The average of the total plan assets for the combined auditors in Texas was $29.6 million. Ernst & Young had the largest average total plan assets of $2 billion. Although KPMG is not in the top 10, the Big 4 firm trailed behind Wagner Eubank & Nichols by only about $1.9 million. 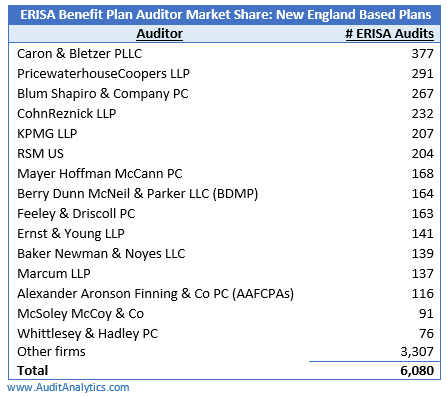 6,080 ERISA benefit plans in the New England region plans obtained audits. Caron & Bletzer led the pack with 377 audited plans, and PwC was not far behind with 291 plans. 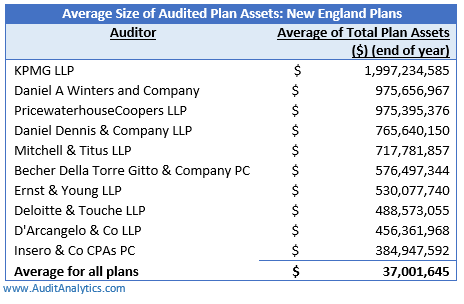 Consistent with recent findings, this data supports that while the Big 4 are influential in the auditing of larger public companies, smaller auditing firms hold more market share of ERISA benefit plans.

Audit Analytics tracks audit fees, auditor changes and a wide range of audit and regulatory disclosures, with the ability to create daily email alerts for new disclosures by industry, auditor, location, and more.Please contact Audit Analytics for an online demonstration or to learn more about these data sets. You can call us at (508) 476-7007 or e-mail info@auditanalytics.com.

Note: Data pulled on 6/21/16 and accounts for the most recent filing an individual plan has had in the last 30 months.