Last year we published a blog post reporting on the significant decline in the number of SEC comment letters that refer to issues in 10-K and 10-Q filings. In this post, we look at comment letters from 2015 to see if that trend continued.

The chart below depicts the total number of comment letters by the year of their origination, from 2010 to 2015. 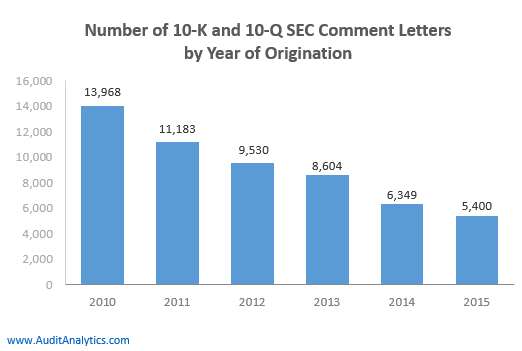 Last year, we offered as an explanation that companies are simply getting better at financial reporting. The SEC reviews the financial statements of any given public company at least once every three years – that hasn’t changed – but the regulator only issues comments if it finds material areas of concern. It is possible that the SEC is finding fewer material issues, in which case it would send out fewer comment letters. Another possibility is that companies have improved at responding to the SEC’s comments, which would reduce the total number of letters since there would be less back-and-forth.

In a recent article over at TheCorporateCounsel.net, Broc Romanek (citing Reid Hooper of Covington & Burling) provided another possible explanation for the phenomena: the Division of Corporation Finance has implemented a higher materiality threshold, and has shifted to a more consistent principles-based review.

As with last year’s analysis, we used two metrics to evaluate the complexity of the issues raised in comment letters, namely (a) average number of letters per conversation, and (b) average number of days to complete the review. Presumably, comment letters with more complex issues and/or a greater number of issues are more difficult to resolve, and, as such, would tend to result in longer conversations, both in terms of the number of days and the number of letters back-and-forth it took to resolve the issues.

Of course, the past does not always forecast the future. A recent array of SEC speeches sends a clear indication that the SEC might be changing its priorities – especially when it comes to non-GAAP disclosure. Some might argue that “the SEC staff’s tone in the [Compliance and Disclosures Interpretations] is intentionally forceful in an effort to ‘send a message.” While the full extent of what the SEC’s actions with respect to non-GAAP are not yet clear, 2016 comment letters look likely to provide some interesting disclosures.