On October 6th, GT Advanced Technologies (GTAT) and its subsidiaries filed for bankruptcy protection under Chapter 11. Speculation about the company’s negative prospects were apparent after Apple decided not to use GT Advanced as a supplier for the behemoth’s latest iPhone. Shares lost significant value after Apple’s announcement, and short interest in the company was rampant by mid-September. Nevertheless, the market was stunned by the bankruptcy filing, as many were still quite bullish about its prospects.

In the company’s press release, Tom Gutierrez, president and chief executive officer of GT Advanced Technologies, explained that the company “has a strong and fundamentally sound underlying business. Today’s filing does not mean we are going out of business.” But this is highly debatable. By early October, the company’s stock had lost roughly half of its value, and then lost a further 90% after the bankruptcy filing. A recent Forbes article quotes a Raymond James report as suggesting that GTAT stock is essentially worthless, and the statement made by the CEO belies the fact that he sold 75% of his shares in the company beginning last year.

There is little question that GTAT was a speculative buy at best. Many were aware of the risks associated with the company’s reliance on Apple. And it looks like investors are still making a speculative play here. As noted in Reuters yesterday, GTAT shares actually closed up 51 percent at $1.21.

But beyond the business risks, there were a handful of clear governance and accounting issues that should have been a major warning sign to investors. Prior to the bankruptcy filing, the company exhibited a number of qualitative red flags. The table below shows a timeline of events, beginning with the January 2014 announcement of the CFO’s departure. 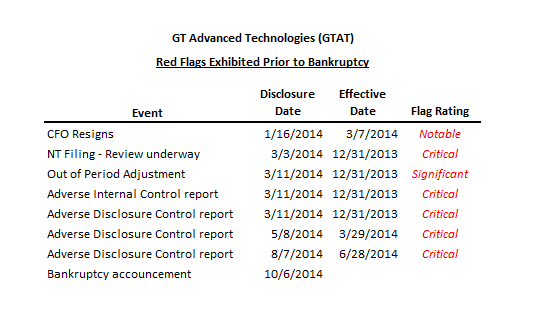 As you can see, these qualitative red flags signaled trouble; a series of events that should have given any investor reason to take note of the serious risks involved with this equity. Shortly after the CFO resigned, the company was unable to file its 12/31/13 10-K on time. A review was underway related to the company’s tax accounting. Late filing notifications of this sort are correlated with many negative consequences, and by the time the 10-K was filed a week later, things had become more serious.

First, the company corrected an error in its tax accounting, done through the easy-to-miss method known as an out of period adjustment, in which errors are recorded as one-off adjustments as opposed to restatements of previously filed amounts.

Next, in the same filing, the company disclosed material weaknesses in both its internal controls over financial reporting and disclosure controls. The company made the following disclosure:

At December 31, 2013, the Company’s controls over the accounting for income taxes were inadequate and ineffective. Specifically, our processes and procedures did not provide for adequate and timely review of various income tax calculations, reconciliations and related supporting documentation required to provide reasonable assurance that the amounts related to taxes payable, deferred tax assets and liabilities, the provision for income taxes and the related footnote disclosures are prepared in accordance with generally accepted accounting principles.

Interestingly, the market hardly responded to these disclosures. After a brief drop from $17.19 to $16.23, GTAT stock rebounded strongly to $19.14 over the next ten days. The material weaknesses persisted in the company’s quarterly evaluations of its disclosure controls up until the bankruptcy announcement.

Now the obvious question you may have is how these events – especially the tax-related accounting weaknesses – relate to a bankruptcy proceeding. The straightforward answer is that they don’t, but that is not a complete answer.

These red flags do two things for the curious investor. First, they work as alerts. Imagine you have a portfolio of 50 companies. Can you track them all every day? Maybe not. Imagine you have a company in your portfolio you haven’t given much attention to lately. An alert pops up that the CFO resigns. You look into it, conclude it’s not a big deal, and then continue on. But then, shortly after that, you get another alert about this company. This time they can’t file their 10-K by the required deadline. “Now what’s going on?” you might ask yourself, and you start to dig deeper into the company’s filings, looking for more information or clues. Then you get another flag, and another, and one more after that. At this point, you should know: this equity is very risky.

Second, these qualitative red flags paint a picture, so to speak, of management and the company’s tone and governance. Great companies tend not to have accounting and control problems. If they do, it’s often symptomatic of a deeper underlying problem. So in this particular case, although the red flags were about tax issues, which are not directly related to bankruptcy, they do tell you that (a) not everything at this company is hunky-dory, and (b) this company is qualitatively different from most of the other companies in your portfolio, and you should understand why. Hindsight is 20-20, of course, but a company with this pattern – CFO resigns, Late Filing due to an internal review, culminating in a Material Weakness in its Internal Controls of Financial Reporting – has “stay away” written all over it. Doing so would have saved a lot of money, even if the eventual problems were not directly related to the issues in the flags.