Hain Celestial Group (NASDAQ: HAIN) announced on Monday, August 15 that it would delay the release of its fourth quarter and fiscal year 2016 financial results. The reason? The company was investigating certain revenue arrangements with distributors.

During the fourth quarter, the Company identified concessions that were granted to certain distributors in the United States. The Company is currently evaluating whether the revenue associated with those concessions was accounted for in the correct period and is also currently evaluating its internal control over financial reporting. The Audit Committee of the Company’s Board of Directors is conducting an independent review of these matters and has retained independent counsel to assist in that review.

The next day, shares in Hain dropped 26%, representing a loss of $1.55 billion in market value. Are the markets overreacting? Or is there trouble ahead for the Russell 1000 food company?

The company indicated in its press release that it expects to file a notification of late filing on Form 12b-25 (NT 10-K) to obtain an automatic 15-day extension, but “there can be no assurance that the Company will complete the preparation and filing of the Form 10-K within the extension period.”

In the rest of this post, we’ll look at historical patterns in late filings that might shed some light on Hain’s situation.

Overall, the number of NT 10-Ks has decreased significantly and consistently over time. 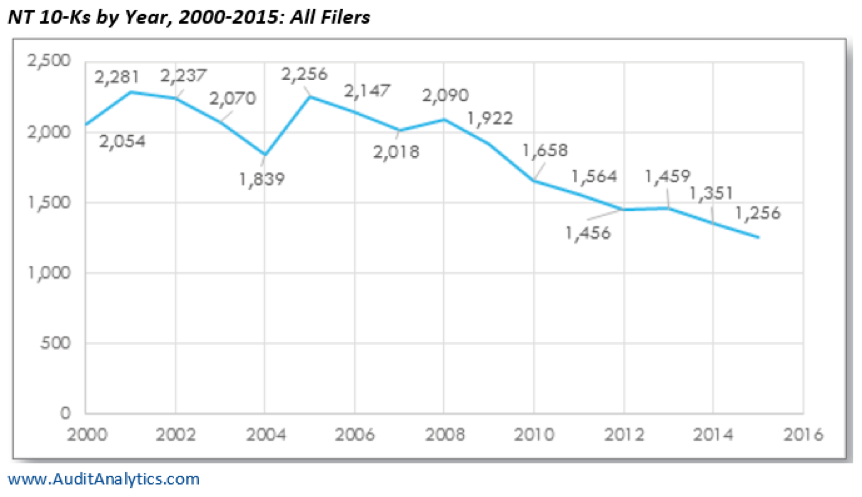 It’s important to emphasize again, however, that the vast majority of these NTs are filed by small companies with little to no market cap.

Accounting-related NTs are significant.
Late filings as the result of accounting issues are, as you might expect, even rarer. Of the 1,000 odd NT 10-Ks filed so far in calendar 2016, a total of 102 (10%) cited accounting issues as contributing to the delay. (That includes the whole universe of 10-K filers, including pink sheets.)

So if a big company files late, it’s more likely to be because of more serious problems. Further, there’s the possibility that larger companies, because of their better reporting quality generally, also provide more detail in their NT 10-Ks, and so are more likely to accurately report the circumstances that led to a late filing.

2016 seems to be something of an anomaly so far. Of the 13 Russell 1000 companies that have filed an NT 10-K this year, seven cited accounting issues, notably higher than the average of 38%. That of course might balance out over the rest of the year, but we have seen an apparent trend in many areas – internal control weaknesses, going concerns, restatements – suggesting an overall increase in reporting issues.

Looking at the table above, after accounting-related issues, pending financial restatements are cited about 20% of the time, followed by SOX 404 issues (about 32% combined), and then investigations (10%).

Hain hits all three. As noted in the excerpt above, they’re investigating their revenue recognition for certain distributor arrangements, and also evaluating their internal controls. This is not an everyday ordinary late filing. (They haven’t even filed an actual NT 10-K yet.)

How long will it take?
Since 2009, NT 10-Ks have usually been resolved with the filing of an actual 10-K within about 30 days, give or take. 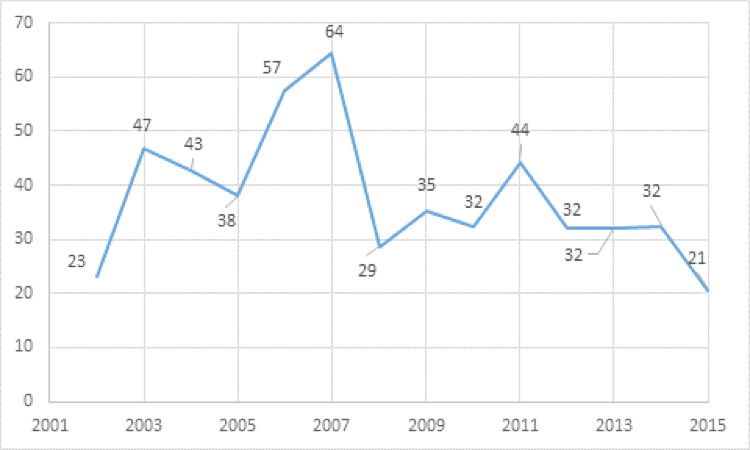 But, it depends of course on the severity of the issues contributing to the late filing. Sometimes a company is unable to file on time because of minor technical problems with using the EDGAR system. In cases like that, the actual 10-K is usually filed within a couple days at most. Other times, like when there are investigations into accounting issues as with Hain, the delay is significantly more pronounced.

What to expect.
So what to expect? The main concerns with delinquent filers, aside from the obvious negative stock reaction, are debt covenant violations, de-registration with SEC, and de-listing by a stock exchange.

Other negative consequences include high chances of management turnover (see, for example, ComScore (NASDAQ: SCOR), which appointed a new CEO after filing late for consecutive quarters), shareholders legal actions and, in some cases, SEC investigations, all of which are likely to drain resources and distract the company from focusing on regular business activities.

Another aspect worth noting is the high costs associated with accounting investigations and subsequent restatements. In some extreme cases, direct costs associated (which do not include loss of economic profits) could exceed $30 million.

One thing is clear, though: revenue recognition investigations are bad news for the company and investors, and, at least from the historical perspective, quick resolution may not always be possible.

Note: Some of the data used in this post is taken from our recent report, “Late Filings: 2000-2015”. It is available to subscribers to Audit Analytics or for purchase to non-subscribers. For more information about this report or our custom research, please contact us.