When a company files a 10-K, they are providing a substantial amount of information relating to their business including risk factors and financial statements. Understandably, these files are extensive and leave plenty of room for missed or omitted information, misstatements, or other inadvertent errors. In these cases, the company would file an amended 10-K (more commonly referred to as a 10-K/A) to provide or correct the missing or incorrect information.

In this post, we provide an overview of the major reasons NYSE and NASDAQ companies gave for having to file amended 10-Ks in 2016. 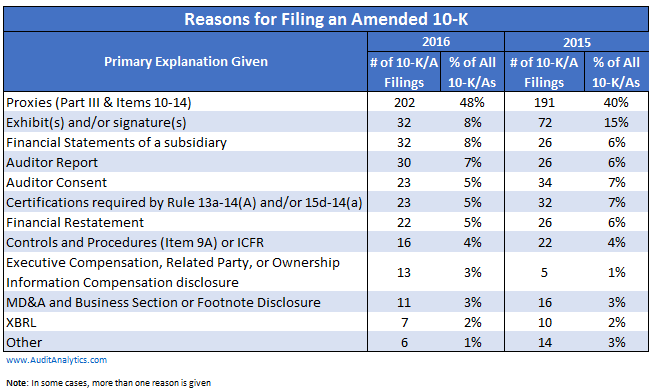 Consistent with 2015, the most common reason (comprising almost half of this population) for a 10-K/A was to incorporate the information required in Part III. The information required in Items 10-14 is allowed to be filed either with the original 10-K or in a proxy statement or amended 10-K no later than 120 days after the period end. With that being said, amended 10-Ks filed for this reason should not raise concerns since they are completely compliant with regulations. For example,

We are filing this amendment to include the information required by Part III of Form 10-K to be filed as part of the Original Report as we will not be filing our definitive proxy statement within 120 days of the end of our fiscal year ended December 31, 2015. Except as set forth in this Amendment, no other changes have been made to the Original Report.

Missing signatures and exhibits were cited as the second most common reason for an amended 10-K. Similarly, these amendments should not trigger any alarms as they were typically related to typographical errors, other inadvertent errors, or the re-filing of confidential exhibits following the reception of SEC comments. (In both 2015 and 2016, there were sixteen 10-K/As that were filed in response to comments from the SEC.)

This Amendment No. 1 to Varian Medical Systems, Inc.’s Annual Report on Form 10-K (the “Form 10-K”) for the fiscal year ended October 2, 2015 is being filed solely to update Exhibits 10.43. 10.44, 10.45 and 10.46 in response to comments received from the staff of the Securities and Exchange Commission to a previously filed request for confidential treatment. No other changes have been made to the Form 10-K. This Amendment No. 1 speaks as of the original filing date of the Form 10-K, does not reflect events that may have occurred subsequent to the original filing date, and does not modify or update in any way disclosures made in the original Form 10-K.

Another common reason for amended filings was to present separate financial statements for a significant subsidiary or an equity method investee, mostly pursuant to Rules 3-09 and 3-10 of Regulation S-X and, likewise, should not raise any concerns as companies filing for this reason are typically providing information that was not available at the time of the original 10-K which, again, is completely compliant with regulations.

This amendment No. 1 to Form 10-K (this “Amendment”) amends the Annual Report on Form 10-K for the fiscal year ended December 31, 2015, originally filed on February 11, 2016 (the “Original 10-K”), of Groupon, Inc. (“Groupon”). Groupon is filing this Amendment to include in Item 15 the separate financial statements of Monster Holdings LP (“Monster LP” or the “Partnership”) as required by Regulation S-X Rule 3-09 (the “Rule 3-09 financial statements”), which were not included in the Original 10-K and are due within 90 days of our fiscal year end. The Rule 3-09 financial statements include Monster LP’s consolidated balance sheet as of December 31, 2015 and its related consolidated statements of operations, comprehensive loss, partners’ capital, and cash flows for the period from May 27, 2015 through December 31, 2015.

This Amendment should be read in conjunction with the Original 10-K. Except as expressly set forth herein, this Amendment does not modify or update Groupon’s financial position, results of operations, cash flows, disclosures or other information in the Original 10-K and does not reflect events occurring after February 11, 2016.

On the other hand, filings that cite financial restatements as the reason for filing a 10-K/A should certainly raise some questions considering in most cases, material restatements are often accompanied by material weaknesses in internal controls.

Although many of these amendments are routine in nature (such as the Part III requirements), other reasons could be indicative of process weaknesses or other underlying issues. Audit Analytics tracks amended filings and the reasons that trigger them. If you would like more information regarding these filings, comment letters, or any of our other datasets, please contact us at info@auditanalytics.com.