It is time once again to look at macro trends in SEC Comment Letters. As with every year we will look primarily at comments from 10-K’s and 10-Q’s, but like last year we will also be analyzing 8-K’s and what insights we can garner from them.

Part of the decline is attributed to the general decline in the number of SEC registrants, which has dropped by almost half since early 2000s. Another reason could be related to a more principle-based approach to issuing comments utilized by the SEC – while all companies are reviewed, the comments are issued only if the disclosure is substantially unclear. 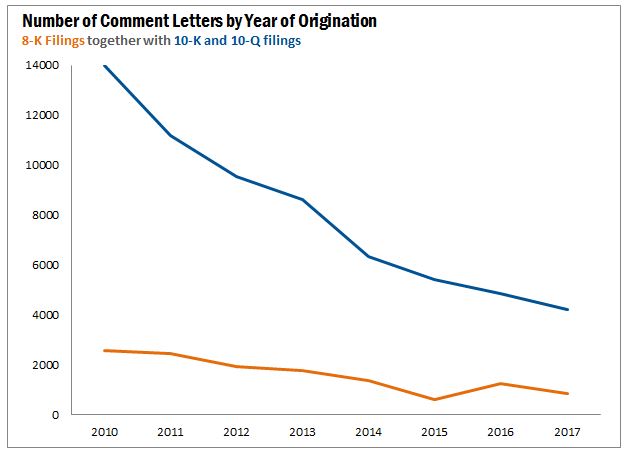 Notably, after a sharp increase from 2015 to 2016, we see a 30% dip in 8-K comment letters – from 1,251 to 857, this is still well above the 589 letters in 2015 (which was the survey’s minimum). As we explained last year the jump from 589 to 1,251 was largely due to the SEC initiating a massive Regulation G campaign that focused heavily on Non-GAAP presentations in earning releases. Non-GAAP was the most common reason cited for comments in 2016 and in the campaign continued into early 2017. At the end of 2017, the SEC indicated that their non-GAAP review had largely achieved its goal of reducing overly prominent presentation of the custom metrics. This resulted in a sharp drop in comment letters in the second part of 2017 and this trend continued into Q1 of 2018.

Other metrics that could be helpful in evaluating the complexity of reviews include duration of the review and number of letters. Longer conversations may signal challenges in resolving SEC comments. 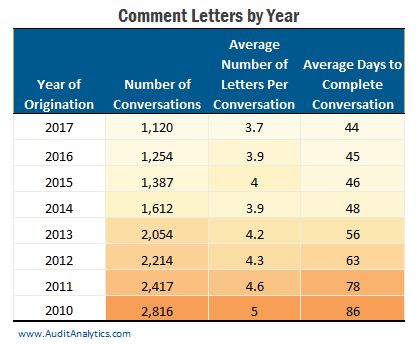 The number of days it takes to resolve comments has decreased by nearly 50% since 2010. Similarly, the average number of letters per conversation also decreased, from 3.9 to 3.7 letters, indicating the conversations have been less complex.