The data found in SEC Comment Letters can offer insight into some overlooked areas of a company’s business. In the past year, we have discussed a continuous decline in the number of letters and major areas of concern raised by the SEC. 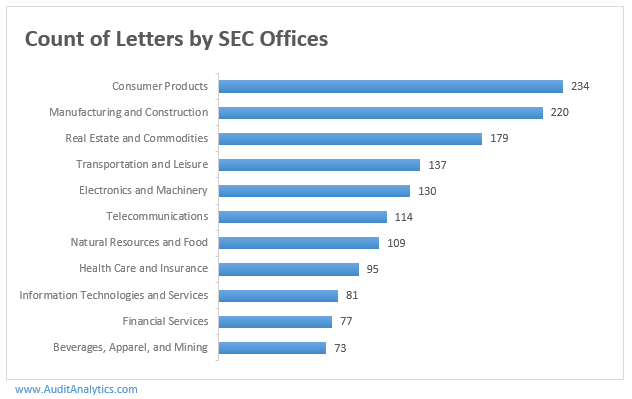 interesting stats, focused on only one side of the equation – namely, the SEC’s review of a company’s financial statements. In this post, we would like to bring up another, less discussed aspect – namely, the people who write the letters.

Let’s start with a high-level overview of the number of UPLOAD letters issued by each of the 11 offices of the SEC Division of Corporation Finance during 2016. (The UPLOAD form is for a letter from the SEC to a company. CORRESP forms are responses to the SEC from a company.) The Office of Consumer Products was at the top of the list with 234 letters written to 174 companies, followed by the Office of Manufacturing and Construction with 220 letters to 151 companies.

Next, let’s look at who signed the letters on the corporate side.

Not surprisingly, almost 60% of the letters were signed by the CFO, with an additional 14% 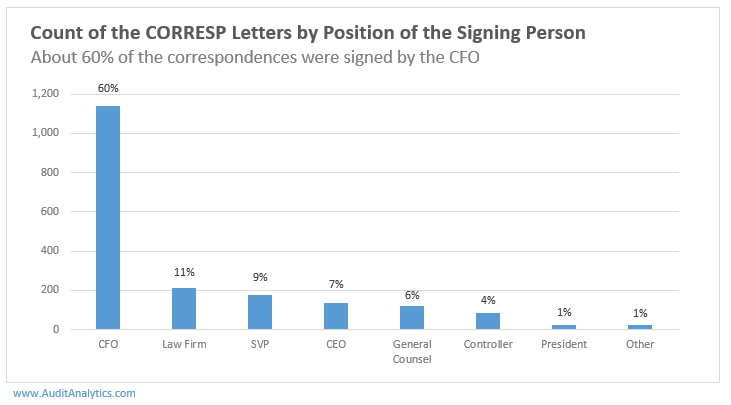 being signed by either a controller or a VP/SVP (for the most part, VP of Finance or similar title). Most comment letters are likely to have at least one accounting question, and even M&A section comments would involve components related to accounting practices or financial projections, so it makes sense that the CFO would be the primary contact on SEC comment letters.

Interestingly, external counsel – indicated by “Law Firm” in the table to the right – signed 11% of all letters responding to the SEC.

Let’s take a further look at the role that third parties, such as law firms and accounting firms, play in the comment letters process.

Between the years of 2010-2014, companies copied their auditor on

comment letters about 10% of the time. In 2016, 213 (or about 11%) of the CORRESP letters referenced auditors, consistent with the historical trend. Overall, 17 different audit firms were named in the comment letters; EY topped the list with 54 letters, followed closely by PwC with 51 letters.

Law firms were copied by the companies they represent more than three times as frequently as auditors. In 2016, 692 (or 36%) of CORRESP letters copied their outside counsel. The top five firms named in comment letters are listed in the table below:

Vinson & Elkins topped the list with 38 letters, followed by Wilson Sonsini Goodrich & Rosati with 35 letters, Latham & Watkins with 30, Baker Botts with 25, and Goodwin with 19 letters. Overall, 160 different law firms were referenced in comment letters from the year 2016.

In some cases, law firms write and sign the CORRESP directly, instead of just being copied on correspondence from a company. For example, Valeant, the controversial pharmaceutical company, had at least two separate sets of Corp Fin reviews in 2016.1 In both cases, the responses came directly from their outside legal counsel, Skadden Arps Slate Meagher & Flom LLP. In total, 212 (or 11%) of the CORRESP letters were signed by the outside law firm. 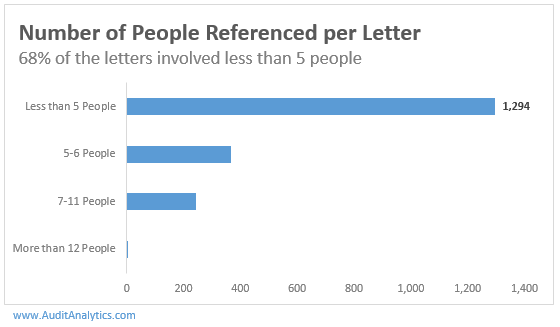 Another interesting aspect that we have seen in the most recent review of Valeant is the (relatively) large number of people referenced in the letters. In addition to the person addressed in the reference line and the person signing the letter, three people were copied – Valeant’s General Counsel, CFO, and Controller.

We were curious to see how frequently comment letters are the subject of such attention. Another company that we discussed recently, MDC Partners,2 had a comment letter with an even larger crowd involved – 12 people in total.

The number of people alone can hardly be used as the only indicator to determine the significance of a particular comment letter. Yet, it seems reasonable that in some especially sensitive cases, companies would prefer to include additional parties in their outgoing correspondence.