There were 65 initial public offerings in U.S. markets between July 1, 2018, and September 30, 2018. These IPOs raised over $13 billion for the quarter, an increase of over $6.17 billion from the same period last year but a decrease of $12 billion from last quarter. 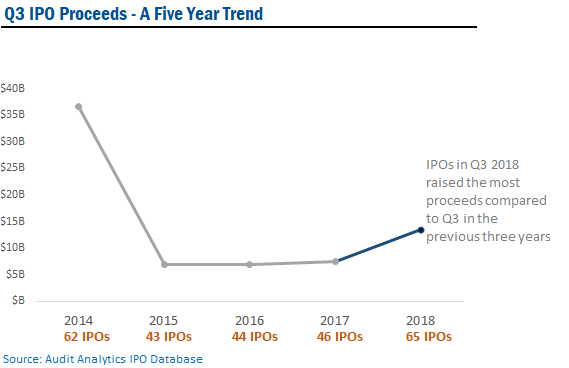 There were 3 unicorns this quarter, two of which were Chinese companies. Pinduoduo Inc. [PDD], an electronic shopping company in China (NAICS 454111), raised over $1.62 billion, topping the charts in terms of proceeds. Although $1.62 billion is the top IPO this quarter, it only ranks as the 59th highest IPO in history – well below that of Alibaba [BABA], which raised $22 billion in Q3 of 2014.

Looking at the industry breakdown, Pharmaceutical Preparation Manufacturing (NAICS 325412) had the most number of transactions this quarter, with 12 new IPOs totaling $895 million in aggregate proceeds. Electronic Shopping (NAICS 454111) had 3 new IPOs, raising over $2.5 billion – more than twice the proceeds of the Pharmaceutical industry.

PwC had 15 IPO audit clients, the most for all firms in Q3. These 15 IPOs brought in over $3.5 billion, the highest amount raised this quarter.

Among non-Big Four firms, Marcum’s 7 audit clients raised the most overall this quarter, bringing in $1.22 billion.

38 of the 65 IPOs this quarter, or 58%, elected to register as emerging growth companies (EGCs).

Although the Q3 2018 IPO market was slower compared to Q2 of 2018, it remains the highest Q3 in new public companies and the second highest in amount raised over the last five years.